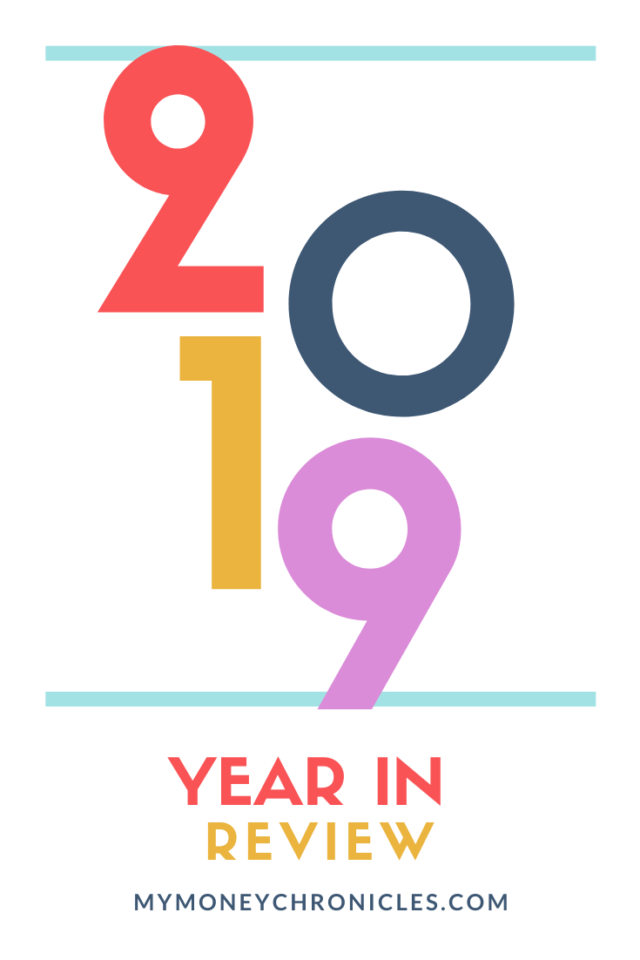 Today’s post is my 2019 year in review. 2019 started off rocky for me. I had wisdom tooth issues and my site rebrand had some issues. I was supposed to officially rebrand on January 1st, but it was pushed back a few days due to a few technical difficulties. I will say that I underestimated how much you had to do during a rebrand. There’s so much that you have to update from social media handles to links in your email newsletter series. It is not a joke. Almost a year later, I’m still finding things that I have to update.

My traffic was also affected. It went down to 2014/2015 levels. Midway during the year, it started to improve, but it’s still not where it was in 2018. I have a plan to grow it though. I took some time during this recent Christmas break to focus on content and to make sure that it’s valuable. I think that year two for My Money Chronicles will be my best year ever for blogging.

I didn’t reach goal number one. I’m somewhere between $12,000-$13,000 with my side hustle income. I’m going to try this goal again though. I lowered the number a little bit though. I also have a more realistic view, a plan and more side hustles that WILL get me there. I’ll let you know the details about this in a future post.

I didn’t reach goal number two either. I’ve paid off approximately $11,200 worth of debt since October 2018. That’s pretty damn good considering how things were in the beginning of this journey. I have a little under $9000 to go. The way things are going I will reach this goal by the middle of they year. Then, I will be able to go to Miami again.

My debt is going down by at least $1000 per month since I restarted the debt repayment plan. If you’re new to my site, I put my debt update posts on hiatus in April. I was tired of seeing the debt go down by only $200-$300 per month. That wasn’t very motivating to me. After getting a new job in (finally!), I was able to restart the updates. The first one went live in August. It’s a great feeling to be able to put more money to this debt. I have a feeling that 2020 is going to be freaking EPIC.

My eBay business is booming. 2019 has been the best year for it. The crazy thing is, I feel like I’m just getting started. I’m continuously testing out new inventory and seeing what sells and what doesn’t. I currently have 241 items in my store. I have items all over my living room lol. I’m glad to have a side business that I like.

I also started a Facebook group a few months ago. It’s doing well so far, If you want to learn more about eBay and other platforms, join the movement here.

I also received this message a couple of weeks ago. 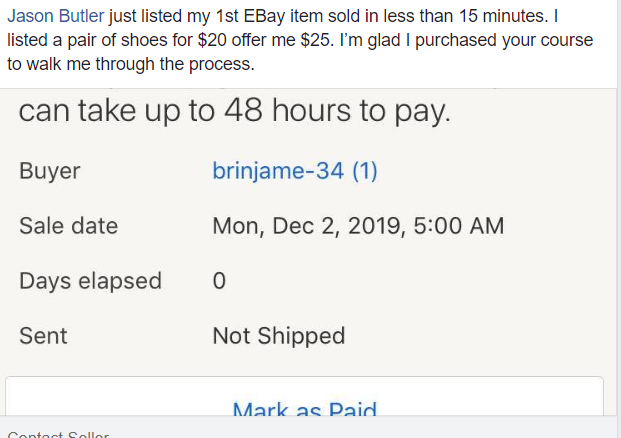 It feels damn good to be helping people and to provide so much value. If you are looking to make money with eBay, grab a copy of my course, How to Make Money in Your Spare Time With eBay today.

I made over $300 selling t-shirts on Teespring, Merch By Amazon and Red Bubble. $300 may not seem like much to you, but it’s fine with me. These sales came from mostly search and social media posts. I haven’t even started doing ads for the shirts yet. In 2020, that’s going to change. I have a couple of Facebook pages out there where I’m going to be promoting the different designs. I don’t want everything tied to My Money Chronicles. A lot of the shirt designs don’t have anything to do with side hustling or money. Some are even a little controversial.

2019 was a good year for travel.  I went to Las Vegas to see some NBA Summer League action and hang out with some of my Frat brothers. I went to Philadelphia to catch an MLB game. Also, I went to Washington, DC for FinCon and Charlotte. Last, but not least I was able to visit Europe. That was someplace that I wanted to go since 2012.

In Europe, we visited London, Paris (my new fave) and Belgium. I had a blast in Europe. I can’t wait until my next visit. Below are some posts that I wrote about my time there. Check them out when you get a chance.

The Best Things to do in Paris

The Best Things to do in London

Tips For Traveling in Europe

I had my best speaking engagement when I participated in the Plutus Voices Event here in Atlanta. Below is a short video about it.

I also had the honor to be on some Facebook chats with my friends Sandy ( Yes, I Am Cheap) & Tonya (My Fab Finance). I was also featured on some dope podcasts including Journey to Launch and I Don’t Do Budgets.

I made it a goal to put myself out there even more and I did it. Because of that, you will see even more of me in 2020, so be ready.

In 2019, I made sure that I focused on what I want. When I did that, I started seeing more results. I plan on taking things even further next year.