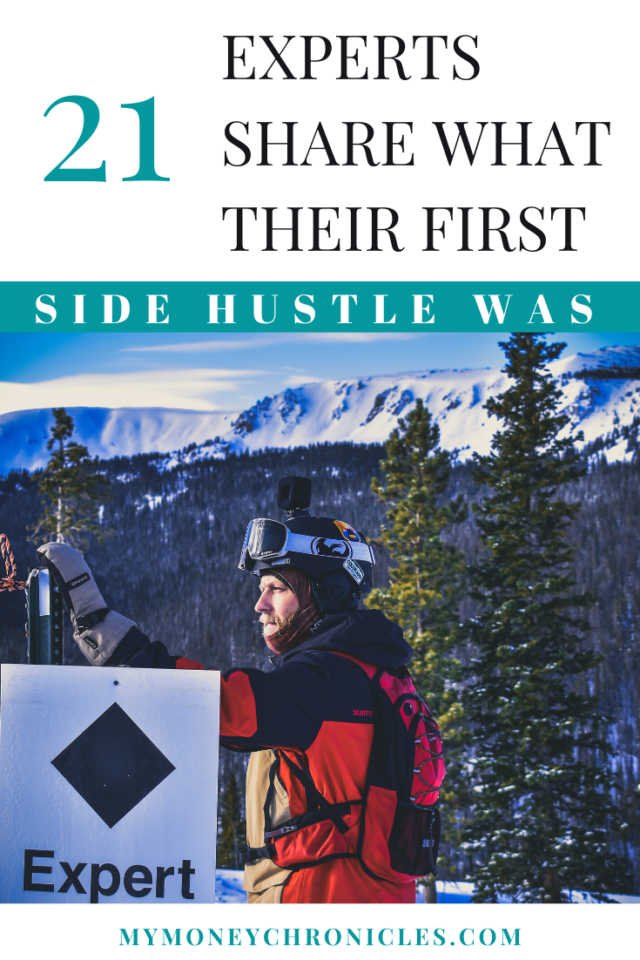 Happy Friday everyone! I hope this has been a good week for you. If you’ve been reading TBJ for a while, then you know I love a good side hustle. Selling things on eBay to designing and selling shirts are just a couple of my side hustles. In my opinion, everyone should have a side hustle. Things are better when you have multiple streams of income.

If you’ve never had a side hustle before, you might have some doubts. You might be wondering what type of side hustle you can do. You may also ask yourself would it be successful. Having doubts will stop you in your footsteps. Don’t let that happen to you. You have to get out there and try some side hustles.

We all have to start somewhere. 21 experts shared with me what their first side hustle was. They also shared with me if it was successful or not. Let’s start with the first expert.

“My first side hustle was refereeing kid’s soccer. I made $20 a game every Saturday. That was more than I made at my regular job.”

“My first side hustle was freelance writing. I was definitely successful, but boy did I burn out quick. Scaled without proper planning.”

Grayson Bell – Debt Round Up

“My first side hustle was mobile detailing when I was in high school. It taught me a lot about running a business, advertising, profit margins and more. For a teenager, I would say that it was successful. As an adult, I realize the many mistakes I made. I was able to make a few thousand dollars in one summer but stopped before college.”

“I was seven years old, and my aunt worked at an elementary school. She would get old decommission library books. I setup the books on my grandmother’s stoop and tried to rent the books to people passing by. I failed miserably.”

“My first side hustle was a teleprompter operator for the news. I did it at night after my day job working in sales. It was successful in that I earned more (hardly made anything at my day job), and it helped me save up money for my emergency fund and my wedding.”

“My side hustle is my main job now! Started a blog, now we are here.”

“My first side hustle was playing poker on the weekends at a local casino when I was 18 years old. Some would say this is simply gambling, but I studied the game and was a winner over time.

I definitely would say this side hustle was successful as I made a few grand from it. I used some of the money to pay for a volunteer service trip to Juarez, Mexico. My future wife was also on this trip, and we started dating a few months after. It goes without saying that I’m glad I did this side hustle!”

“My first side hustle was a comparison shopping site for footwear, which ultimately was the vehicle that let me quit my job. It earned money as an affiliate for Zappos and other online shoe stores. Before investing in having the site built, I tested the idea with Google text ads for specific models of shoes starting with a budget of $1 a day. That was my way of “firing bullets before cannonballs.” in “Good to Great” speak,”

Teresa Mears – Living on The Cheap

“My first side hustle was selling Wallace Brown greeting cards. It was a total flop. I hated, hated, hated selling door to door! But I was quite successful as a teenage piano teacher from age 13 to 16 until I was old enough to get a regular job.”

“My first side hustle was a part time wedding photography business. I ran it for seven years and averaged about $40,000 a year from it. During my highest paying year, I made $70,000, but I wound it down because I started losing my passion for it. It was also physically demanding and also time-consuming. I also still worked full-time and was a new mom to twins.”

“My first side hustle was buying and selling musical instruments that people were trying to get rid of. I worked in a music store and was able to track down special types of guitars, basses, etc. for both first time musicians and collectors. It was great. I would go to pawn shops or look through classified ads. Then I would be able to resell them in a retail environment as second hand. The instruments were gently used, but way better value than buying a new one. My first instrument was a Garth Brooks guitar, and I made 300% in under 24 hours. After that, I was hooked. I loved that side hustle.”

“My first side hustle was home and office cleaning. It was successful in that I did the work and got paid. I picked it up and dropped it whenever I needed to while working, going to school, being a mama, etc.”

“My first side hustle was creating websites for people who played this (old and probably not in circulation anymore) computer game. There were really primitive forums around back then for this game, and I “advertised” there. It was successful for a pre-teen, but I gave up on it once I went to high school and decided boys were more interesting than coding. HUGE Mistake. (No offense to the men here).”

“As a kid/teen, it was delivering newspapers, washing cars and babysitting. Basically, anything I could get my hands on to get paid to do, I did. As an adult, it was being a dental assistant while I was a full-time hairdresser (Did dental work on my days off from hairdressing), plus I did hairdressing for friends and family after work. I moved out at 17, so I needed to make extra cash.”

“When it first opened, and business was slow, Bidz.com gave huge coupons to bid and buy. I was 17 years old and bought gold and diamond jewelry for $10 of shipping and resold to pawn shops in my area. I ended up banking $500+ before their promotion ended.”

“I used to buy homeschool books on a site called Wagglepop (like eBay) and then resell on eBay. No one knew about Wagglepop at the time, so you could pay pennies for things and then resell high. It was the best kind of arbitrage.”

“My first side hustle was selling my own stuff on eBay. I started selling my old SNES and video games and moved into all kinds of random toys, CD’s, and DVS’s I had laying around my room. Once I sold all the stuff that I didn’t want, I started going to garage & estate sales and buying things to resell. It was very successful, and I still sell stuff on eBay. I just looked, and my eBay account was started in January 2002. That’s crazy. I was still in high school. At my peak during college, I was earning about $2000 a month in profit from buying and reselling.”

“My first side hustle was writing stock market analysis and reports in 2011. I had just earned the Charted Financial Analyst (CFA) destination and wanted to get started as an analyst. Since my day job was a Labor Market Economist, I didn’t get a lot of opportunities to talk stocks so I started looking around for websites and advisors that would hire me to freelance for them.

I found my best marketing tool was a report I did on market integration, a report that got picked up by Bloomberg and got me a spot on an expert panel at a conference in New York. Sometimes it’s this initial portfolio-building work that needs to be done to show potential clients. Having the designation helped a lot, and I was able to find three clients that gave me regular work for years.”

“My first side hustle was writing articles on money and marketing (two separate topics) for magazines. We wanted to pay off our mortgage, and I liked to write. So I started a freelance business and pitched some magazines. I built my way up from writing for 10 cents a word to $1 a word over the course of four years. I ultimately earned $10K to $15K per year and put most of the money toward the mortgage. Once it was paid off, I shut down the business as magazines were beginning to pay less and writing at 2 am several nights a week was killing me. But the side hustle was a key reason we’ve been without a mortgage for over 20 years.”

“I started a second website called MJ Life Insurance. It took about five months to start getting leads and just closed my second life insurance case. This income has reimbursed me for the website creation and start-up costs. The next life insurance policy will turn a profit for the site.”

From the age of about 13, I was always looking for ways to make extra money. I had jobs such as working on an Italian ice truck serving ices and pretzels, selling light bulbs, door to door, and a regular job as a cook in our local luncheonette. As a true side hustle, after I was married and working full time, my wife and I started a part time business selling wedding invitations from our home (before the internet). We obtained many popular wedding invitation books at little or no cost and then advertised locally to obtain customers. We were somewhat successful and made a few extra dollars each month, but it never lived up to my expectations. I’m glad I did it because I learned a lot about running my own business and that later helped me when I became a flea market vendor for a side hustle several years later.”

21 experts just shared their first side hustle experiences. Some did great and others not so much. One thing they didn’t do is stop trying. They all have successful businesses. I’m not sure about you, but that is very motivating. If you don’t have a side hustle yet, you now have 21 examples to consider. My first side hustle was selling calendars in 7th grade. That now makes 22 examples. It’s time to stop making excuses.  Figure out what side hustle works for you the best and start making this extra money.

What was your first side hustle?