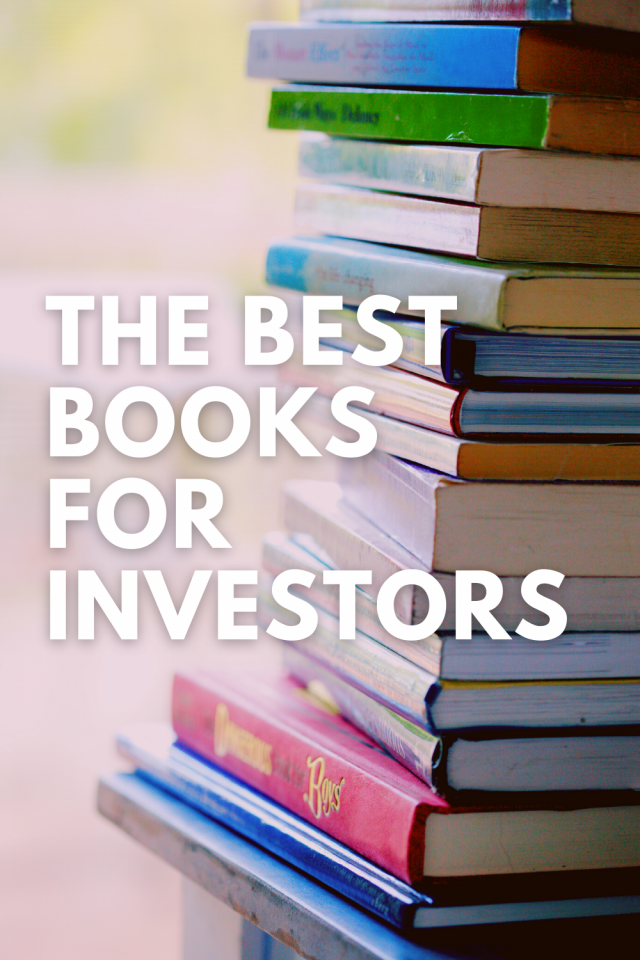 Reading should be the first step in the path to becoming financially independent. Not only is it a great way to acquire knowledge, but it is also cheap. Through the years I have read countless books on stocks and markets. Some of them were extremely important in shaping my views and conclusions. Even the bad ones have had the ability to question my views. Not agreeing with an author can also be important to develop your investment ability. This post features some of the best books for investors.

There are a few books that are as impactful as The Intelligent Investor. In a sense, this book is like high school for stock pickers. The author Ben Graham laid out his value investing thesis for a broader audience. The book is written in a fluent and perceptible manner, that is accessible to readers from all walks of life. There Benjamin Graham explains the foundation for his investment strategy. Looking for cheap companies that are trading under their real value. He walks the reader through the best ways to identify such stocks. As the same, it allows you to learn a lot of new concepts, and perhaps a new way of looking at your own investment process.

I can’t stress how fundamentally important this book is to master stock picking. You will learn basic concepts on how to look for undervalued companies. How to analyze them, and how to value them. All in an easy-to-understand way, that will help avoid common investment mistakes. From time to time I always come back to this book, as there are chapters that can really change your investment life.

Once you have graduated from the so-called high school of stock picking, after reading The Intelligent Investor. You should move on accordingly. Security Analysis is for stock pickers what the Bible is for Christians. Nowhere will you find such a collection of assessments on stock investments. The book which was co-authored by Benjamin Graham has certainly withstood the passage of time. Although some of the chapters don’t directly apply to the investing environment of the 21st century. Many of the knowledge and teachings will certainly impact you. Security Analysis requires a little more comprehensive knowledge of topics like accounting and economics. It is a great tool for aspiring stock investors that are willing to put in the time and effort to master their craft. Initially published in 1934, it is incredible how most of the content still applies today. It is among the most iconic books on stocks, and it is widely used in Universities across the country.

Graham coined the term value investing, and it is considered its father. He has definitely been one of the most important influences on Warren Buffett’s investment style. So much so that he was not only his professor but was also present when Warren first started working in the industry. Although he was his mentor and his biggest influence, Buffett’s investment strategy has slightly changed over the years.

Phillip Fischer influenced Warren Buffett to change his investment style over the years. The change in Buffett’s investment strategy was both impacted by Charlie Munger and Phillip Fischer. Graham advocated focusing on cheap companies, independently of their quality. An idea which over the years has morphed into focusing on wonderful companies at a fair price. In his book “Common Stocks and Uncommon Profits”, Fischer outlines the most important factors to consider when evaluating a stock. From management to the operational aspect of the business. The book serves as a great tool to understand how Warren Buffett acts and invests today. Although Buffett has admitted that Graham has had the biggest influence on his investment style. Some people argue that Fischer has actually had a bigger influence on Buffett. Its investment style is characterized by buying companies with competitive advantages and holding them for the long-term. The book outlines the most important aspects to analyze businesses.

Next up on the list of books for investors is this gem. Charlie Munger is known as Warren Buffet’s right arm. He has been incredibly important to Berkshire Hathaway over the years and still serves as vice-chairman. In fact, Charlie is believed to have influenced Warren to shift his focus from cheap companies, into fairly valued companies that have a competitive advantage. In this book, you will find a little bit of everything. Charlie is extremely eloquent, you will find advice on investments and life. His views are unique and straightforward, its ability to convey extremely complex information in a simple way is an important aspect that is present throughout the book. The title is a tribute to Benjamin Franklin and titled after Poor Richard’s Almanack. The book is pricey, but it is worth every penny, the knowledge it contains is invaluable.

One of the most difficult books to get your hands on is Margin of Safety. Only a few books were printed when it was first released. Today they are extremely rare and collectible. So much so, that you can see some of them selling for over $500 on eBay. Written by Seth Klarman, the book expresses his views on investing and his value approach to analyzing companies. His approach to investing has allowed him to achieve great returns over the years. Margin of safety teaches the readers to value a company. Margin of safety is essentially the difference between the price paid for a specific stock and its value. Seth Klarman argues that by analyzing companies following his principles, investors will be able to buy stocks under their value. Preventing their investments from loss value.

Certainly the smallest item on the books for investors list, but perhaps one of the most influential. John C. Bogle has revolutionized investments during the 20th century. He was certainly one of the most important investors in the 20th century. Thanks to him, millions of people around the world have invested in stocks. His ideas led to the creation of Index Funds, and Vanguard. Vanguard is today one of the biggest asset managers in the world. John C. Bogle revolutionized investing for millions of people. It allowed them to invest their savings in a secure and low-cost way. In this, you will learn how actively managed funds tend to underperform the index funds. It outlines the reasons why index funds are usually the best investment vehicle for most people. John C. Bogle has started the passive investing revolution that characterizes today’s markets.

One of the greatest economic minds of our time, Robert J. Shiller book details how behavior can influence markets. The next book on the books for investors list focuses on the dot-com bubble and helps readers understand basic behavioral economic concepts. One of the most important investment books of the 21st century, written by a Nobel laureate. The title of the book is attributed to Alan Greenspan, Fed chairman at the time of the dot-com bubble. During a 1996 speech Alan Greenspan said the following:

“Clearly, sustained low inflation implies less uncertainty about the future, and lower risk premiums imply higher prices of stocks and other earning assets. We can see that in the inverse relationship exhibited by price/earnings ratios and the rate of inflation in the past. But how do we know when irrational exuberance has unduly escalated asset values, which then become subject to unexpected and prolonged contractions as they have in Japan over the past decade?”

Among the books on this list, this is probably the most insightful given the current market situation in which we find ourselves in.

One Up on Wall Street

Perhaps one of the most influential mutual fund managers of the 20th century. Peter Lynch is incredibly insightful and his books have helped millions of investors. His simple approach to investments and stocks has allowed him to become one of the most successful investors of the 20th century. His investment strategy and focus on apparently uninteresting companies are explained thoroughly in this book. The book is filled with investment advice and can help first-time investors develop their own strategies. Peter Lynch managed the Fidelity Magellan Fund from 1977 to 1990. During that time it was the best performing mutual fund in the world.  When he initially started managing the fund in 1977, it had $20 million under management. When he left the total assets under management were $14 billion. An impressive achievement and Peter Lynch remains one of the most influential fund managers of our time. I would also recommend his book “Beating the Street”, which shares some of the same concepts and analyzes in a deeper and more intuitive way.

Michael Lewis is among the most important financial writers of our time. In this book, you will find Michael’s analysis of the events preceding the 2008 financial crisis. The book is an extremely important read for most investors. You won’t find information on how to choose or value stocks. On the other hand, it provides the reader the ability to understand the intricate functioning of Wall Street. The actions that led to the housing collapse of 2008 are accurately portrayed in this book. It also helps investors understand the risks associated with investments. The book was of such importance that it turned into a movie starring a number of well-known actors.

I hope you enjoyed this post that featured the best books for investors. Which one is your favorite?

Value of Stocks is an independent financial information provider. Focused on analyzing stocks with a value investing approach. Our main goal is to help investors make better investment decisions.