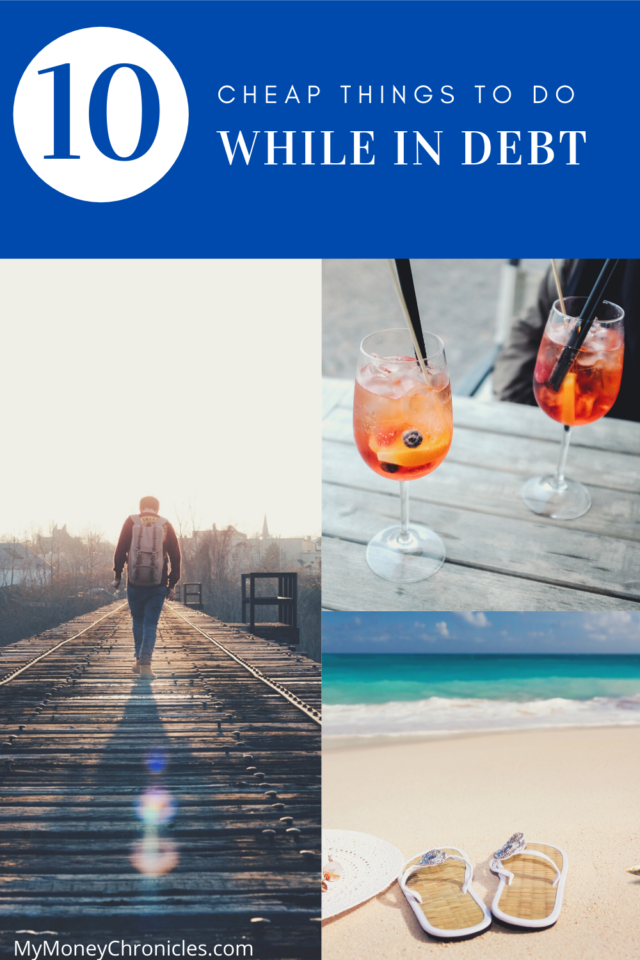 Hello, Everyone. According to the U.S. National Debt Clock, the U.S. is over $19 trillion dollars in debt. That is a ridiculous number. My $60,000 student loan debt is a part of that debt. We have an epidemic in our country. There are a ton of people working to eliminate theirs right now. Just because you have debt doesn’t mean that you can’t still have fun. Today, I want to share with you ten cheap things to do while you’re in debt.

Most cities have free events that you can attend from time to time. They could have free art shows and music festivals. Check your city’s local event websites. The newspaper probably has an event section that will show you everything that’s going on. You may be shocked to see what kind of free events that are available near you. There is something going on every week here in Atlanta.

Go to the Park

I love going to the park. It’s so relaxing. You can have a picnic while you’re there. You can also people watch and listen to music. Many people also exercise while they are in the park. In Atlanta, there are many parks to choose from including Grant & Piedmont Parks respectfully. At one point, I was going to the park a few times a week to get some exercise in. If you haven’t been to the park in a while, I’d suggest you go sometime this week.

The third item on the cheap things to do list is to go to happy hours. You can save a lot of money by going to restaurants and bars during happy hours. A lot of places have after work happy hour events. You can get a couple of drinks and an appetizer for $10. You can’t beat that. One of my favorite happy hour spots has $3 drinks and $0.35 wings. Some places also have a late night happy hour. They may offer half-priced appetizers after 10 pm. Happy hours are one of my favorite things to do. TripAdvisor or Yelp are good places to see what happy hours are available in your city.

Become a tourist and walk around your city. If you live in a big city, there are areas that you aren’t acclimated with. Check out the different neighborhoods.  There could be hundreds of cheap things to do in certain cities. Browse new places that may have just opened. Some cities even have a free trolley or foot tours that you can do.

I’d log on to a map online and figure out what area of the city that I want to check out. From there create an itinerary of certain places that you want to see.

Day trips tend to be pretty inexpensive. You can go out of town, visit a few attractions, and grab dinner for less than a couple of hundred dollars. If you don’t want to drive, you can take Greyhound, Megabus, or even catch the Amtrak. Last year, I went to Washington D.C. for a family reunion. I had an extra day to chill, so I booked an Amtrak ticket and went to Baltimore for a few hours to catch a Major League Baseball game. The train ticket was less than 30 bucks. If you’re in debt and haven’t considered a cheap day trip, you should plan one soon.

Hosting a game night at your home is something else that is another one of my favorite cheap things to do. You can invite a few people over and play multiple games for a few hours. In the past, my friends and I used to grab some drinks and play Phase 10. Those games used to be very fun and eventful, to say the least. Other games that make for a fun game night are Spades, Uno, Monopoly, and Scrabble. Click the links below to purchase your game.

If you live near a beach, I’m jealous of you. I’d go every week if I were you. The beach is so much fun. You can go there with friends and relax all day. A lot of us don’t live near the beach, so we don’t get the chance to enjoy it as much as people that live on the coast.

You can have a picnic or even exercise on the beach. Consider yourself very lucky if you live near the coast.

Another way to have fun while you’re in debt is to have a potluck. You and your friends or family can get together at someone’s house. You can decide to bring different dishes. Potlucks can be kind of cool. You can see which friend knows how to cook and which ones don’t.

People love to exercise. Health is wealth. A health membership might not be affordable because you’re in debt right now, but that doesn’t mean that you can’t work out. I exercise outside when I get a chance. I run around my neighborhood a few times per month. Also, I work out at one of the local parks whenever I don’t feel like going to the gym.

The final thing on the list is to watch sports games at home with your friends. Having your friends bring something with them will make sure that you have stuff to eat or drink. A decent six-pack of beer costs around $8. Depending on what bar you go to, you won’t even get two beers with $8.

Those were just a few cheap things to do while you’re in debt. You don’t have to stay at home and watch television all day. Get out there and enjoy life, my friends. Don’t let debt get in the way.

What are some more ways that you can have fun while in debt?