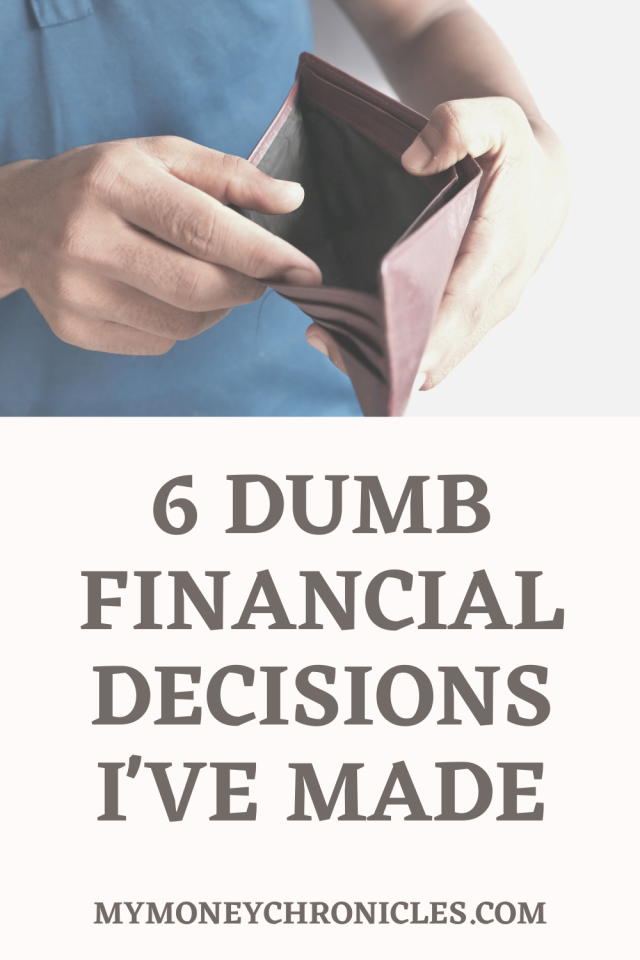 Unfortunately, people are not born financial geniuses. Growing up I hardly learned much in school about certain things such as credit card debt. I made quite a few bad financial decisions in my early to mid-twenties. I’m glad I finally wised up a bit. Below are six dumb financial decisions that I’ve made over the years. I share them with you so that you won’t have to go through them.

Everyone makes mistakes when they are young. I know I did. Using my credit card when I didn’t have the money is one of the worst financial decisions that I have done. I can remember numerous times using my credit card to buy drinks at the bar for my friends and me. At the time, I thought it was fun and cool, but now I realize that it was stupid. I intended my credit card to be used for emergencies. Getting drunk with my friends was not an emergency.

I should have some more discipline and only used cash. If you just got a credit card, don’t make the same mistake that I did. Only use it for emergencies.

I knew nothing about cars when I purchased my first one in the summer of 2007. The only thing that I knew was that I needed a car. My roommate who I used to ride to work with was moving off-campus. I went to a used car dealer in Savannah, GA (I was still a student at the time) and saw a 2000 Chevy Malibu for $5800. It only had 84,000 miles on it at the time. I had a friend at the dealership with me, but he didn’t know much about cars either. We took the car for a test drive. Everything seemed fine.  I put some money down and made the purchase. I was excited to have my first car.

About a week later, I  was planning to go to Atlanta to show the car to my family. I was about a third of the way there when the car died on me. I sat on the side of the road for a minute and it eventually started back up. The bad thing was that if the car went over 50 miles per hour it would cut off. That was the longest ride ever to Atlanta. I got home and thought things would be fine so I tried to drive it again the next day. I was cruising on I-75 going downtown when the car died on me again. Man, I could not believe that that was happening again. I ended up leaving the car on the side of the road. I had to take the Greyhound bus back to school.

My aunt had the car towed to a mechanic. The car had a bad fuel pump. They said it would cost over $700 to fix. I was extremely pissed. I did get lucky, though. The used car dealership actually paid for it to get fixed. That usually never happens especially when you buy a used car as is. I definitely learned my lesson. When my Malibu finally died on me for good in 2013, I purchased my next car from a mechanic.

Buying a vehicle is an important decisions. When buying a used car, make sure that you have a mechanic or a friend that knows something about cars with you. Sallie Mae is hands down the worst lender to get a student loan with. They don’t care if you are having an economic hardship or anything after you graduate. They just want their money. Unfortunately, I made the mistake of borrowing from them in school. Having to deal with multiple phone calls a day where people are asking you to pay is not fun. I wouldn’t wish that on anybody. If you’re still in school, please STAY AWAY from Sallie Mae. I don’t want to be on your list of dumb financial decisions.

Luckily, I was able to refinance my Sallie Mae loan with another lender, Earnest. I was able to get a lower interest rate and a smaller payment as well. For more information on refinancing your student loan, click the link below.

Get $200 to refinance with Earnest here.

Not paying off small loans quicker.

We are on my fourth thing on the list of dumb financial decisions. I had a couple of small loans where I took about a year and a half to pay off. After I had received my final statement from the companies I saw that I paid over $100 in interest for both loans. If you have small loans, just pay them. The interest was not a joke. I wasn’t doing as many side hustles as I’m doing now back then. If I was, those smaller loans would have been eliminated in a few short months.

I didn’t always use my check register to balance my bank account. A few years ago I used to estimate what I had in my account. That was a dumb ass move. Then, I would try not to go over that amount. That clearly was not smart. I would forget purchases and check my account to see overdraft fees. All that could have been avoided if I had just buckled down and balanced my books. After a while, you will get tired of paying those fees. I know I was. Those fees were adding up. I am happy to say I haven’t had an overdraft fee in almost three years. I use a check register to help me with my account. If you don’t want to do that, you can use a program like Personal Capital. You can see all of your money transactions on the platform and more.  The good thing about Personal Capital is that it’s free.

Not facing my debt earlier

I knew I was in debt the moment I was out of college. It really didn’t hit me how much until I got that first statement from Sallie Mae in November 2008. Instead of actively coming up with a plan to pay it off, I just paid when I felt like it. I also only paid a small amount. Please learn from my mistake and make a plan to pay that sh!t off. You might have to sacrifice some things now, but it will be well worth it. You won’t be looking at having to repay student loans 10 years after you graduated from college.

These are six dumb financial decisions that I don’t want you to make. If you’ve already made them realize that your world is not over. You can fix them by taking control right now and coming up with a plan. If you need more motivation, you can check out Brooks Conkle to get some more ideas on how to fox your financial future.

What dumb financial decisions did you make when you were younger? Did you learn from them?