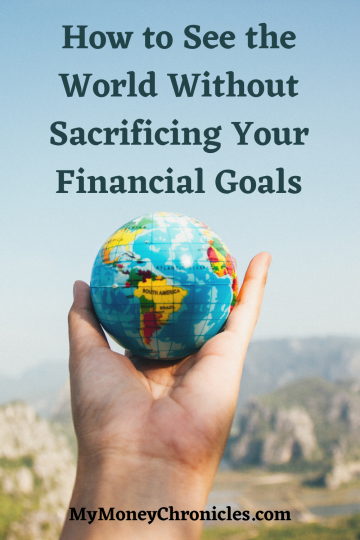 Today, I have a guest post from Anna of LogicalDollar.

For so many of us, our financial goals include being able to finally take that dream vacation.

Maybe your bucket list includes taking a gondola through Venice or going on that Kenyan safari or simply lying on a beach in Thailand.

But the problem for many people, especially anyone who’s in, say, North America or Oceania, is that going anywhere takes so much time and, importantly, so much money.

That is, not only do you need to apparently save for ages just to go anywhere foreign, you also need to accumulate enough vacation days. And for anyone working somewhere where those days are limited, you could easily eat up your entire year’s worth just with one quick trip overseas.

It’s for these reasons that while a lot of people dream of seeing the world, they don’t plan to do so until they retire. With years of saving ahead of them, they seem to be satisfied with having these incredible experiences “one day”.

But what if I told you that the “one day” could be brought forward to now – and not only would it not be bad for your finances, but could actually put you in a better position financially?

Here’s how I’ve done exactly that.

How traveling can be good for your finances

Simply put: a much easier way to be able to see the world and save money on traveling is to spend some time living closer to those parts of the world you want to see.

Easier said than done? Not at all!

And I’m speaking from first hand experience here. Having had the chance to live in various cities in Europe and the Middle East, I’ve had the opportunity to visit places that I’d only ever dreamed of seeing.

Heading out on a Saturday to go hiking in Oman? Going for a long weekend in Zanzibar or Tbilisi? How about jumping on a train after work on a Friday and, in just a few hours, ending up in Paris, Amsterdam, or Berlin?

These are all more than possible when you live in their general area. And, safe to say, it’s certainly much easier (and cheaper!) to do this than getting on a plane and spending an eternity getting there from New York or Sydney.

But how is this good for your finances, besides the reduced travel costs?

Well, I’ve managed to combine these moves with some really great job-related steps as well. It means that I’ve ended up earning the same as or even more in my job than I would have if I’d continued on a similar career path at home.

This, in turn, means I’ve been able to continue saving for retirement – while not having to wait until retirement to see the world.

What this shows is that you don’t have to sacrifice your financial goals in favor of your overseas adventures. In fact, you can easily do both.

How can you do this?

Let’s be clear about this: Some work will be needed before you book the next flight out.

So here are a few key points I’d recommend you keep in mind.

When you talk about spending time overseas, people often start picturing working as an au pair in France or teaching English in Japan. And while those are great options, you’re not that limited.

That is, no matter what job you do at home, someone is likely doing the same thing in every country in the world.

This means that, at least theoretically, you could do the same work overseas too.

Of course, this is over-simplifying it a bit. Some countries may not recognize your qualifications and there’s also a potential language barrier. This is why it’s a good idea to first do your research to see where you can actually work, as this can help to narrow your list of potential options down somewhat.

Check where you’re allowed to go

Unless you’re fortunate enough to have a second passport for your intended destination, welcome to the not-so-wonderful world of visas.

Put another way: it’s nice to dream of going to a certain country, but you have to be sure they’ll let you in (and let you work) first.

This doesn’t have to be as hard as it first sounds though. For example, if you’re working in some form where you make money online, consider looking into the German freelance visa.

Alternatively, countries like Australia maintain a list of jobs where foreigners can get a working visa more easily. There is a massive range of jobs on this list, including anything from accountants to hairdressers to even more specific things like airconditioning and refrigeration mechanics. This means that there’s a good chance that a role related to your line of work may be there too.

On the other hand, countries in the Gulf like the UAE have a huge demand for people from a variety of professional backgrounds, such as medical personnel, engineers and teachers, which may be for you if you’ve dreamed of living somewhere like Dubai. The great thing here is that the vast majority of people in these fields in these countries are foreigners, so it’s very likely that your qualifications will be easily accepted here, not to mention that English is widely spoken. While you should be prepared for a high cost of living (and high temperatures in summer), salaries are tax-free and most people report earning far more there than they do in their home countries.

So do your research and see what options are out there for you based on both your nationality and your professional background.

I’m a firm believer in the idea that you should be able to stick to your financial goals without sacrificing your travel plans. That said, it’s critical to make sure that you will be able to do both.

Specifically, it’s important to be realistic about the costs involved in moving abroad to make sure that it really is a good idea from a financial perspective.

This doesn’t only involve the initial moving costs. You may have to factor in things like health insurance if your new employer doesn’t provide it, semi-regular flights home as well as variations in the cost of living in your new home compared to where you’re coming from.

It’s also a good idea to have a budget for how much you’re willing to spend on travel costs. While seeing as much of your new home and its surroundings is an incredible thing to do, it can quickly add up if you start to see everything as a treat.

Instead, tell yourself that you’re going to be here for at least a few months (although plenty of people end up staying away for much longer than they initially planned…) to stretch out your fun-related costs over your period abroad.

And, much like at home, stick to that budget!

It’s completely normal to be a bit apprehensive at the idea of moving far away from the life you’ve known – but that’s also what makes it so exciting!

And if it has the added bonus of actually putting you ahead financially, then what’s the harm of looking into it further?

This is especially when you consider the alternative of having to wait until retirement to start ticking items off your bucket list. Why wait that long when you could start those adventures right now?

As with anything, it’s important to do your research and consider your own personal circumstances.

But at the same time, if you’ve ever found yourself talking about what you’ll do “one day” – you know, that magical day when you have the time and the money to follow a certain path, whichever corner of the world you imagine that path being – then this could easily be the solution to making that one day today.