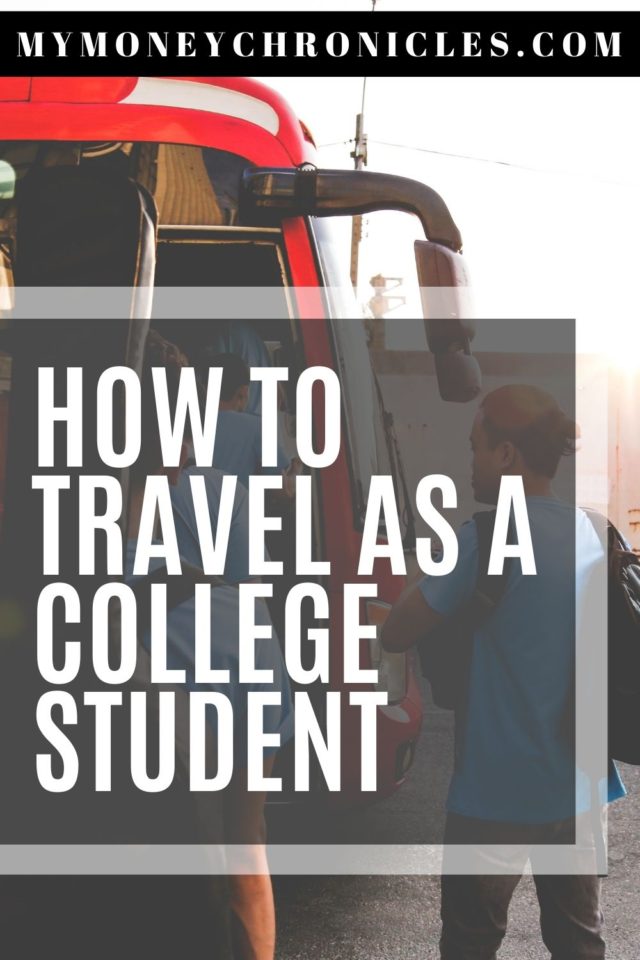 I love traveling. A lot of people have heard me say that travel is my “anti-drug.” That’s the truth. There is nothing better than visiting someplace different and enjoying a new city. When I graduated high school and went to college (shout out to Savannah State University). I vowed to travel whenever the opportunity presented itself. Looking back at my college years I can say that I was very successful at doing that. I visited several cities such as Miami, NYC, Las Vegas, and Nashville when I was an undergrad. People would ask me “Aren’t college students supposed to be broke?” In today’s post, I discuss different ways on how to travel as a college student. It’s going to be easier than you thought. Participating in illegal activities was not one of them! Cheap student travel can happen.

Stay with friends or family

The 1st way that you can travel as a college student was to stay with family or friends. On some of the trips that I went on, I stayed with friends. If they had an extra couch or decent floor space, I was there. I easily saved a couple of hundred dollars by doing that. It took the stress out of trying to find a hotel or other place of lodging.

I joined a fraternity during my third year in college. Little did I know how many people I would meet and network with because of that. After I had crossed, my frat bros and I started going to parties, and step shows at other schools. We began meeting people from all over the country. A lot of them were really cool. They would say “Let me know when you’re coming to my city. You can stay with us”. I can’t even remember how many times I took people up on their offers. There was one semester where I went on road trips almost every other weekend. I only remember coming out of the pocket for a hotel room twice. I wrote all that to say that if you are in a frat or sorority, use your network and reach out to people.

Use some of the student refund

We’re up to number three on the list of how to travel as a college student. I will be the first to say I never purchased a car or expensive clothes with my student refund. However, I did use some of my refund for a few trips. This may not be the smartest decision, especially if your refund is student loan money. You will eventually have to pay back. Just keeping it real, some of my refund was from student loans. I don’t regret using it to travel at all. It allowed me to see other cities besides Atlanta and Savannah. My comfort zone expanded because of that. I’m sure the same will happen to you. Just don’t spend too much of your refund.

I worked a part-time job during the majority of my college days. At one of the jobs, I was a busser at a restaurant. I made GREAT money there. After I had paid the couple bills that I had each month, I was able to save a decent amount for travel. A couple of road trips and fraternity conferences were paid with that money. The crazy thing was that I didn’t get a car until the summer before my senior year. I found several ways to get to that job before then.

Travel as a group

The most common way I saved money was to travel with a group of people. There were numerous road trips where 4-5 of us would pile into someone’s car and split the gas and hotel charges. If we knew someone that lived in the city that we were visiting, we would save even more money by just having to pay for gas. Numerous road trips cost less than $60 per person because of this strategy.

If you’re going to do group travel make sure that you and the people that you’re traveling with are on one accord.  Out of all the group trips that I’ve been on I only had one that started off bad. To keep it short I will just say that I ended up having to book a room at another hotel to keep people from potentially fighting. Most of the group came with me while three people stayed at the original hotel.  Once we separated from them, the trip turned out great.

I wish that I could have added studying abroad as the 6th item on this list. It sucks that I can’t. I really wanted to study abroad when I was in college, but I let procrastination and doubt get to me. That is one of the few regrets that I have in life.

Below are some  travel resources that I recommend

I’ve been using Priceline since I was in college. This is one of my go-to websites when it comes to travel. They have a lot of hotel deals on their site. You can get Express Deals or if you live on the wild side, you can Name Your Own Price.

Some days you will be driving longer than others. You may not want to get off the exit or go to a store. Bring a cooler and fill it up with food and snacks. You have no idea how handy this will be for you. Here is an example of a cooler that you can use. It’s only $14 and doesn’t take up much space.

If you want to save money on your lodging, check out Airbnb. I booked rooms with them in Cuba and Miami. The places were nice and I saved money. If you are interested in trying out Airbnb for the first time, check out my link here. New users get $40 off their first stay of $75 or more.

Did you travel much as a college student? If you did, how did you make it happen? What other ways do you have for cheap student travel?