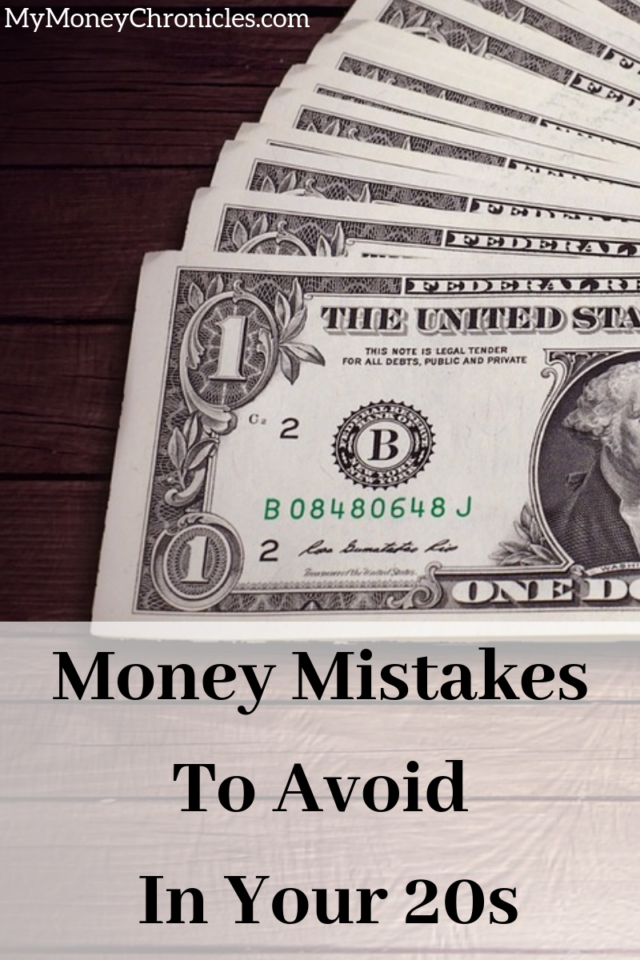 Most of my 20’s were a wonderful time. Some years were better than others, depending on the situation I was in. I graduated from college (Savannah State University) at the age of 24. I also had the chance to live in wonderful cities such as Savannah, GA, and Orlando, FL. I did a lot of things right during that time. One thing I didn’t do right was to take good care of my finances. I made quite a few money mistakes in my twenties that I wish I didn’t. I don’t want that to happen to you. I decided to write a post titled nine money mistakes to avoid in your 20s. Keep reading so that you don’t make the same mistakes.

Money Mistakes to Avoid in Your 20s

I always had a job or a side hustle during my time in college. I never really experienced being a broke college student. I saved a little money here and there, but looking back, I could have easily saved a couple of thousand dollars for a “rainy day.” Once I graduated from college, a couple of “rainy days” happened.  Having a decent savings account could have helped me struggle less during those times. Those were some tough times, but I was able to make it. If you are looking for a savings account to start for your rainy-day fund, check out the Capital One 360 savings account. I’ve had an emergency account with them for years. I have a certain amount of money automatically deposited into that account each month. They are currently offering a $25 bonus for new users who make a deposit of $250 or more.

I didn’t fully understand interest rates until it was too late. I could have saved myself some money by taking the time to read my statements and get a true understanding of my interest. I could have chosen a credit card or a student loan with much better rates than the ones I have now. I also could have kept my balances lower. That way, the interest I was charged each month would have been lower. It’s crazy the things that you learn after the fact.

If Traveling With People For The 1st Time, Get Money Upfront!

I’ve had a couple of situations where I’ve had to pay extra money on a trip because people canceled at the last minute. It’s not a good feeling having to pay an extra $200 for a hotel room when you didn’t budget for it. Fortunately, this hasn’t happened to me since 2007, but I can still remember that extra charge to the credit card like it was yesterday. I’ve ensured that will never happen again by getting money from people in advance.

I would have done more investing. I currently have a retirement plan with my job, but if I were on my game in the ’20s, I’d have at least double that amount saved. Even if I had put some money in a mutual fund, that would have been better than nothing. I refuse to let my 30’s be like that. A couple of years ago, I started investing with Robinhood. They allow you to purchase different stock from your cell phone via their app. They give all new members one free share of stock when they open up a free account. Robinhood is good for beginning investors. You don’t even need a lot to get started.

I promise that I was the king of deferments and forbearances for at least two years. I thought I was doing it by not paying off my student loans. Fast forward to today. Not only was that not the smartest idea, but the amount I owe to my lenders (especially Sallie Mae) has damn near doubled. Even though I didn’t have the best-paying jobs immediately after graduation, I should have at least paid $50 per month on the loans. My situation would be a little better than it is right now. This is one of the money mistakes to avoid that I tell people about the most. You don’t have to be in this situation. All you have to do is plan a little bit better or make payments earlier.

I should have done something else in my twenties: refinance my loans. I lowered my interest rate and payment when I was approved in 2017. There are several lenders out there that you can use to refinance. I went with Earnest. They have a great history of helping people that were in my situation. They are also giving new users a $200 bonus when approved. Who wouldn’t want $200?

Using Credit When I Had Cash

In 2017, I paid off my credit card debt for the 1st time. If I were smarter, I would not have had it this long. I could have paid for a few trips back in the day with my debit card. Also, I could have relaxed on some Irish Car Bombs for me and my friends. I wasn’t a reckless spender, but I made some stupid mistakes. Don’t be like me if you can help it. In my opinion, this is one of the most important money mistakes to avoid.

Learn How to Create a Budget

Creating a budget is essential to have control of your finances. Before creating a budget, I had no idea where all of my money was going. I knew it didn’t go to paying off my student loans or credit card bills! That has changed because I have a handle on things now. It’s not like I even spend that much, but I know how to plan my money to save and provide for my future. This is also another one of the money mistakes to avoid. It will help you save and invest more later on.

Budgeting has become very popular these days. There are tons of budget planners out there that you can use to help you create your own. One of the free ones that I’ve used before is Mint. It’s a very user-friendly application that will help you organize your money.

I thought that I was prepared for the future. I didn’t plan to become rich or anything like that since my job was one of the most boring things in the world. I just wanted to survive. I got by, but I should have planned better. It wasn’t until my mid-twenties that I realized I should have set financial goals. If you want to be successful later on, you better start planning those things.

I never made a serious plan to improve my financial situation. I didn’t even look at my savings or see how much money I had left. I just worked and played. That’s a dangerous way to live. I should have become more organized and thought about what I needed to get where I wanted to be. I have my goals now, but I should have had them sooner.

If you want to be successful, start setting goals for yourself. You might not achieve all of them, but you can at least try to get there. You can’t change what you don’t know, so do your best and don’t worry too much about other things.

I didn’t even think about retirement until I started working on the blog. Now, I’m a little further along in my career and am better off financially than when I was in my twenties. I really should have set up an IRA account in 2017. I would have had much less stress and would be in a better position to retire someday. Even if you aren’t making that much money now, you should start saving for retirement. You can save $5 or $10 a month. After that, you can put whatever you can afford to. It’s essential to have your retirement accounts established before it’s too late.

Now that I’m in my 30’s, I refuse to let those things happen again. Over the past couple of years, I’ve improved my finances. I know this is a struggle for many people. There are a few places online that can help you get organized. Personal Capital is a website that has a free tool that shows you your net worth, among other things. I hope you took something from the list of money mistakes to avoid in your 20s.

What would you do differently financially in your 20s? Did you make a lot of money mistakes?