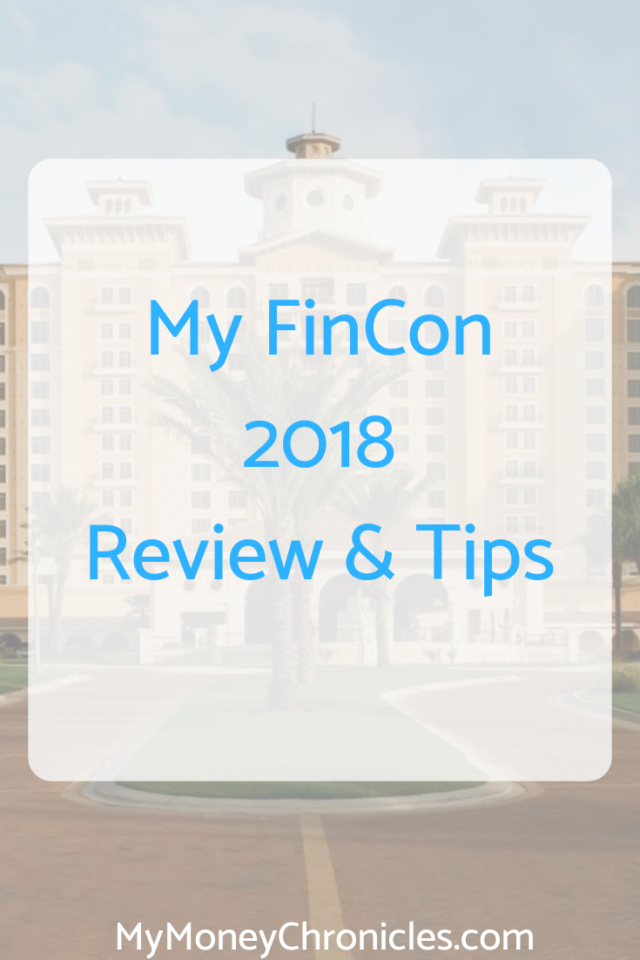 I attended my first FinCon in 2015. It was a whirlwind. I was excited and nervous at the same time. It was cool meeting the people behind the blogs that I read in person. The first person that I met was either Liz from Less Debt More Wine or Tai & Talaat from His and Her Money. Who knew FinCon and the community would change my life so much in three short years?

Last week, I went to my 4th FinCon. It was in Orlando, Florida. FinCon 2018 was my best one yet, I had a blast. I saw old friends and I also made new ones. I also had a plan of what I wanted to accomplish before I got to Florida. In this post, I discuss that plan and more. I also share with you some FinCon tips.

I didn’t have a chance to go to as many sessions this year as I have in previous years. If this was my first or second year I would have gone to a lot more. The sessions that I did attend were very helpful. Next year, I’ll try to go to a few more.

I did the most networking that I’ve ever done at this year’s FinCon. I reached out to a lot of people. Because of that, I have a few opportunities coming up that will help me and my brand. I spoke to people outside of the sessions, in the lobby and at some of the other events.

I also discussed my upcoming rebrand with several people. Everyone loved the idea. I have a feeling that the rebrand will get help me grow and more. The date is 1/1/19. Save it in your calendar.

Earlier, I stated that I had a plan for FinCon this year. Besides networking, another part of the plan was to speak at this year’s conference. Earlier this year I set a goal to speak at 2 events this year. My first event was in April.  In February, I pitched a session to FinCon and it was approved. Taylor of Tay Talks Money, Denis of TruFinancials, Chonce of My Debt Epiphany, Tyler of I am the Future Me and myself did a panel on Saturday morning. I can’t lie, I was a little nervous at the beginning, but we rocked it! It felt gold to complete another goal.

Before the conference, several people posted in the FinCon group that they were looking for people to record segments or do small interviews. These companies are always looking for a diverse group of people, so I signed up. I ended up filming three short segments for three companies. Below is something that I did with Investopedia. They are also looking for volunteers at FinCon. I’ve volunteered the last two years. Doing that allows me to meet even more people. It can do the same for you.

Every Fincon, I make sure that I have fun. I only see most of the folks at FinCon once a year. I had to make up for the lost times. From playing Phase 10 until 2 am, to just hanging in the lobby, I had a blast.

Below are a few tips for you if you are thinking about attending FinCon.

Stay at the Host Hotel

You want to make sure that you stay at the host hotel if it’s possible. Get a roommate or three. Do whatever you have to do. In 2015, I chose not to stay at the host hotel and save money, big mistake. By day three, I was tired of walking back and forth my hotel to the host hotel. I also missed the random hangouts in the lobby. After that, I told myself never again. Depending on how many days, you’re going to be a FinCon, the room could range anywhere from $700 – $1000. Start saving and budgeting now if you don’t think you’ll have money by then.

Don’t forget your business cards. Just keeping it real, I almost forgot mine. If I didn’t see Athena’s IG story, I would have been screwed.  There are a few companies that have deals on gift cards. I get mine from Vistaprint.

I usually try to get to the conference a day early. In the past, Fincon has started on a Thursday. This year it started on a Wednesday. I made it to Florida on Tuesday. I went to Tampa first to attend the Rays vs Yankees game. Tropicana Field was number 20 on my Major League Baseball stadium list. The reason I get to the conference a day early is to learn my way around the hotel and to find out what’s in the area.

Register for the conference early. The prices go up as we get closer to the event. Book your hotel room too. There could be a chance of it selling out. If you are flying or catching the bus, pay attention to those tickets as well.

Get out of Your Comfort Zone

This is harder for some than others but get out of your comfort zone. Talk to people that you normally wouldn’t. Put yourself out there. You’ll be surprised at what may happen.

This is my final tip. FinConners know how to party. Some may even give you a random shot of whiskey in they see you in the lobby, so you need to make sure that you stay hydrated. A quick tip is to find a gas station or store that’s near the hotel and get your water from there. It will cost less than buying bottles at the hotel.

I love FinCon. I already purchased my ticket for next year. It will be in Washington DC which is one of my favorite cities in the country. I’m looking forward to meeting and connecting with more people. How My Life Changed After FinCon

10 People to Meet at FinCon

My FinCon 16 Return on Investment

Have you ever been to FinCon? Will you be attending Fincon 19 in Washington DC?