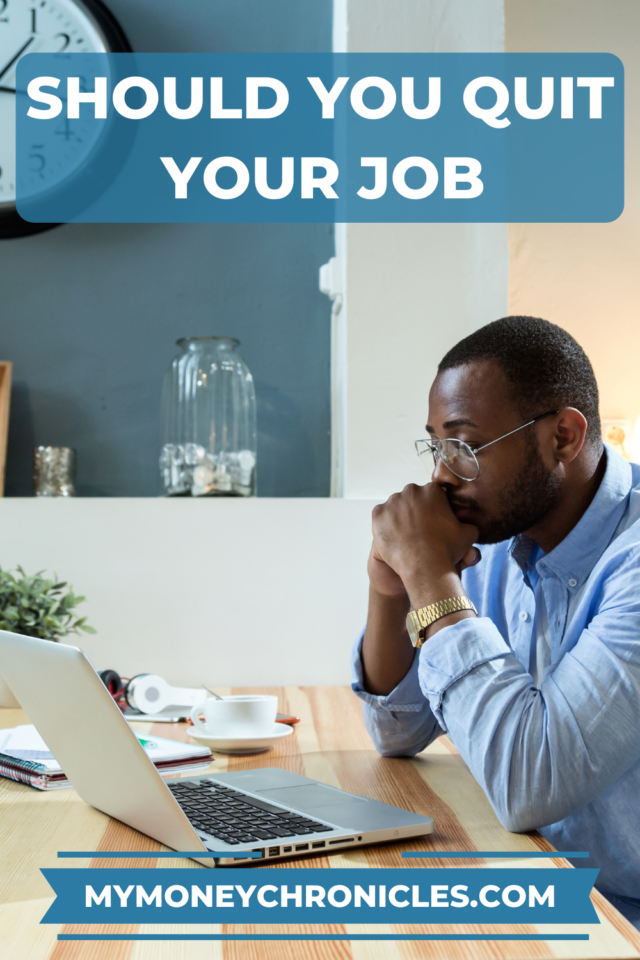 June 28th will mark four years since I quit my job in 2013. I left that job because I was in a dead-end situation. There was no room for growth. I pretty much hated that job. A lot of things happened since that time. Today, I want to share with you what took place when I quit, but first, let me give you some background info.

At the time, I was working as a financial aid rep at a college south of Atlanta. That job started out fine. After a while, it began to get very repetitive. I was doing the same things over and over again. I began to feel stuck.  In October of 2013, I would be turning 30 years old. I know that I couldn’t stay at that job for too much longer.  At the beginning of 2013, I started saving money and made June 28 my end date. Once that time came I was a little nervous, but I knew I made the correct decision. Below are some things that happened when I quit.

I’m going to be totally honest with you. Part of the reason that I quit my job in 2013 was to do some traveling. I set a bucket list goal in 2008 that I was never able to accomplish. That goal was to drive across the United States from coast to coast. The timing for the trip wasn’t right in 2008, but in 2013 I knew it was time. I was 29 and wanted to complete the trip before I turned 30. Cross country trips are looked at as a rite of passage.

I wanted to make the trip during the summer time, so on July 1st, it was on and popping. I drove from Atlanta to Jacksonville, Florida to Santa Monica, California. The trip was epic. I’m not going to hijack this post with all the details. You can read about my cross-country trip here. It’s broken down into four parts.

I returned from my cross country trip on July 14th. I didn’t have a job, but I had money saved up, so I took some time to relax. During the first couple of weeks back, I watched TV, did a little bit of eBay stuff and wrote some blog posts. Looking back, I could have done so much more especially with the site. I didn’t get serious with TBJ until 2015, though. I started to get bored, so I had to find something to do.

One of my friends posted online that he was looking for people to help him with a canvassing job. I contacted him immediately. I was hired and worked that “job” from August 2013 – November 2013. The job was very easy. We went to several neighborhoods and talked to people about the candidate. We only worked 20 hours a week and got paid in cash every week.

After the canvassing job had ended, I was able to find a temp job working for the post office during the month of December. Once December was over, I was back to chilling again. It was around January that I started slowly applying for jobs again. I had previously worked in a financial aid office, and I didn’t want to do that again. I only applied to certain positions. I wasn’t too serious about it. Looking back, I should have been. I wasn’t getting too many call backs, and the money that I had was starting to disappear. By March of 2014, I was almost at my last dollar. I was using credit cards to gas up my tank every other week. I went over my credit limit every month. I started being late on most of my bills. Hell, I wasn’t even paying on my student loans. Things were getting real. I couldn’t be picky about jobs anymore. I had to find a job and do it quickly.

I was almost at $0 when I saw a job opportunity near me on Craigslist. Jimmy Johns restaurant was looking for delivery jobs. I applied on a Tuesday and got hired on a Thursday. I was glad to be working again, but I knew that wasn’t going to be enough. Luckily I had applied with the Atlanta Braves a few weeks before, and they got back with me. I started working for them the following week.

Both jobs were part-time positions that paid hourly. The good thing with Jimmy Johns was that I was taking money home every day in tips. After not having a job for nearly four months I was happy to be working again. Sometimes in life, you have to do what you have to do. Did I want to be working two jobs at 30 with a college degree? No, but I needed money. It was a humbling experience that I needed at that time in my life.

During this time, I started to get a little more serious about life. My twenties were a blur. I had a lot of fun. I didn’t focus on some things that I should have been. At 30, things began to change. I started paying attention to my money more. I also started reading more and started watching less TV.

In November 2014, I started working full-time again. The struggle was over. I only worked those part-time jobs for six months. That was a short period. When I started working full-time again, I knew it was time to do better. I started to pay all my bills again. By March or 2015, I was current again. I wanted to start saving more too. I opened an online account with Capital One. I started depositing money in that account automatically each month. Capital One currently has a promo where new users can get $25 when they open a qualifying account. Check here for more details.

I had my ups and downs when I quit my job in 2013. If I could go back in time, I’d probably redo it. Everything was worth it. The struggle allowed me to grow and expand my comfort zone. I learned so much about myself during that time. My faith also got stronger as well. I learned how to be patient.

Should you quit your job? That decision is 100% on you. Everyone’s situation is different. If you’re considering quitting, please have some money saved and a plan.

Have you ever considered quitting a job without a backup plan?