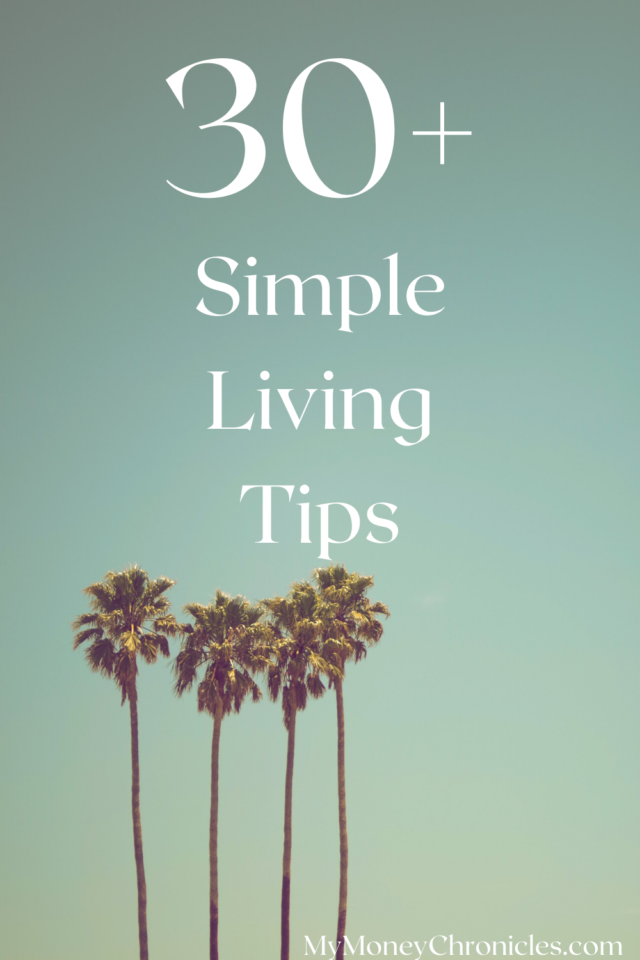 Life can get crazy as hell sometimes. Nobody knew that 2020 would be like this. I like to keep it real and I can’t lie, it’s been weird as hell. I’ve had my ups and downs with this year. I took some time off in June to get my mind right. I’ve been going through some of my old posts and found this one. It was right on time. It features 30+ simple living tips. Hopefully, you’ll gain some insight from reading these tips.

A lot of people don’t drink enough. Back in the day, I used to see info saying that you should drink at least 8 glasses per day or 64 ounces. Looks like that’s the minimum. I know that I don’t drink enough on some days, but I’m working on it. I hope that you are as well. Dehydration is real.

Get up and do some kind of exercise. You will feel much better after you do it. Since the gym was closed the last few months, I’ve run a lot more around my neighborhood than I used to. It’s helped me stay healthy and relatively stress-free. If you’re not sure where to start with your workout, check out some videos on YouTube.

Taking calculated risks can help you get to the next level. It can push you out of your comfort zone which is good. Take some time and weigh your options and ask yourself what’s the worst that could happen. If it’s not death or if it doesn’t make you go broke, go for it. One of the best moments of my life happened when I decided to take a calculated risk. Back in 2013, I quit a dead-end job and traveled across the country for two weeks. To many people, it seemed crazy at the time, but I planned it and made it happen. I grew so much after that trip. I haven’t been the same since. It happened because I took a calculated risk.

Unfortunately, there are losers out there that hate on people from time to time. They hate your progression and instead of trying to make themselves better, they resort to hating on you. It may be tough in the beginning but ignore them. Let your success be your get back at them.

Have an emergency fund

Life is unpredictable. Things are going to happen. You have to be ready. Make sure that you have an emergency fund. I used to say that $1000 is a good start. After living a little more, make sure that you have at least $2000 saved. You will thank yourself for having that cushion. If you need some ideas on ways to make extra money, go here.

Always have a mechanic on standby

I have a love/hate relationship with cars. I love it when they work and hate when check engine lights come on. I’m not a car person at all, so I can’t fix most things on them. That’s where a good mechanic comes in. It’s a necessity. They will get the work done and do it for a fraction of the cost.

Life is all about learning. Only fools choose not to learn. Learning helps you to keep growing. It can also help you make more money, become healthier, and more.

If you’re in college enjoy it. The time moves way too fast

At the time of this writing, I have been out of college for 12 years. That is crazy to me. It seems like yesterday that I was chilling on Savannah State University’s campus. Time is flying. Take heed to this simple living tip and enjoy the moment.

Don’t worry about what people will think

Everyone has an opinion. Some people will like you, while others won’t. It’s life. You can’t worry about what others think of you. It will drive you crazy.

If you’re in your late 20’s or early 30’s and one day decide that you want to rap, do everyone a favor and don’t do it.

This one is just my opinion. It’s easier to start a side hustle or to learn a trade than it is to become a rap star. I love my brothers, but rapping isn’t for everyone. I can think of two rappers that made it big after they turned 30 years old and that’s it. I’m not trying to knock anyone’s dreams but if you didn’t make it rapping in your early 20’s, there’s a good chance that you won’t make it now.

A budget is very important. It tells your money where to go. You ever felt like you were spending, but didn’t know what was happening to your money? A budget will help you get your finances under control.

Hard work really does pay off

Next up on the list of simple living tips is to work hard. It truly does pay off. Just make sure you make some smart decisions when you’re doing that hard work.

This one is for my younger brothers. A lot of them want to be athletes or entertainers when they are younger. The truth is that most of them won’t make it. There are other careers and business opportunities out there. We need doctors, lawyers, good cops, and more.

I’m not a big fan of the following statement: “The grass isn’t always green on the other side”. Actually, the grass is green wherever you water it.

The grass is green wherever you water it means what it says. Whatever you pay attention to and focus on should thrive. What you ignore eventually withers away and dies.

If you want to travel outside the country, you will need your passport. Get it as soon as you can. Here is some info that can help you with that.

Travel. In most cases, it’s not as expensive as you think.

Even if you don’t have your passport, travel. It is one of my favorite things to do. The world is bigger than your block, town, or city. Get out and explore. It’s not expensive. You have several ways that you can travel including, driving, catching the bus, flying, or using the train.

There is no such thing as an overnight success

That overnight success if 5-10 years in the making. Success takes time. Don’t give up. Keep working and one day you will make it happen.

Pay off your debts

Next up on the simple living tips list is pay off your debts. This is one that I’ve been working on for the last 5 years. I’ve had my ups and downs and have wanted to quit, but I didn’t. I know people who are debt-free and see the moves that they are making. That will be me in a couple of years. I’m motivated to become debt-free so that I can do more with my money and help more folks out as well.

If you’re in college avoid Sallie Mae at all costs

Sallie Mae is one of the biggest private loan lenders out there. Many people are approved for loans through the company. They don’t give a damn about you and just want your money. Avoid them at all costs.

Growth happens on the other side of the comfort zone. I bet you’ve heard that statement before. It’s 100% true. In life, you have to push yourself and do things that feel uncomfortable. It’s the only way that you will grow. Who wants to be in the same place they are in ten years from now? Nobody in their right mind.

Surround yourself with positive people

You have to surround yourself with positive people if you want to make things happen. Negative energy will drain the life out of you. It will turn you into a negative person. Sometimes you just have to cut people off. We all outgrow people. It’s not personal, you’re just looking out for your wellbeing.

Sex is wonderful. Most people enjoy it, but it is not worth going broke over. There is no reason to be thirsty and always trying to get ass. You have to calm those urges down. If you don’t, you can expect to be broke.

Some people are just in your life for a season

Another one of the simple living tips that I understand the older I get. Everyone isn’t meant to be in your life forever. Some are there just for the time being. You learn from them and move on. You also grow apart from people. It’s all good. The people who are supposed to be in your life will be in it.

Whiskey is better than vodka

This one is an opinion. Whiskey is better than vodka. It tastes better. Your vibe is relaxed after drinking whiskey instead of being “hype” after you drink vodka.

Sometimes you have to be the bigger person, but not EVERY time.

There is nothing wrong with being the bigger person, but you don’t have to be it every time. Sometimes people are just wrong and they should be the bigger person. If they choose not to, life goes on.

It may be hard for some, especially with what’s going on, but watch less TV if you can. Some people will get it while others won’t but look at it like this. If you are trying to build or create a business, how can you possibly watch TV all day? It’s counterproductive. Turn the TV off and focus or watch some YouTube videos that can help you or give you some tips on how to create that business that you are working on.

I read more now than I did when I was in college. I love reading. It helps to keep my mind fresh. It also gives me ideas about things.

Think for yourself. Don’t let other people shape your thoughts.

I hate groupthink. I also hate cancel culture. In a lot of cases with cancel culture, people are mad that you have different opinions and then want to cancel you. Unless it’s racism or a serious crime, what sense does this truly make? There is nothing wrong with having a different opinion. Groupthink is a problem in this country. Don’t be afraid to think for yourself.

Do what other people won’t do.