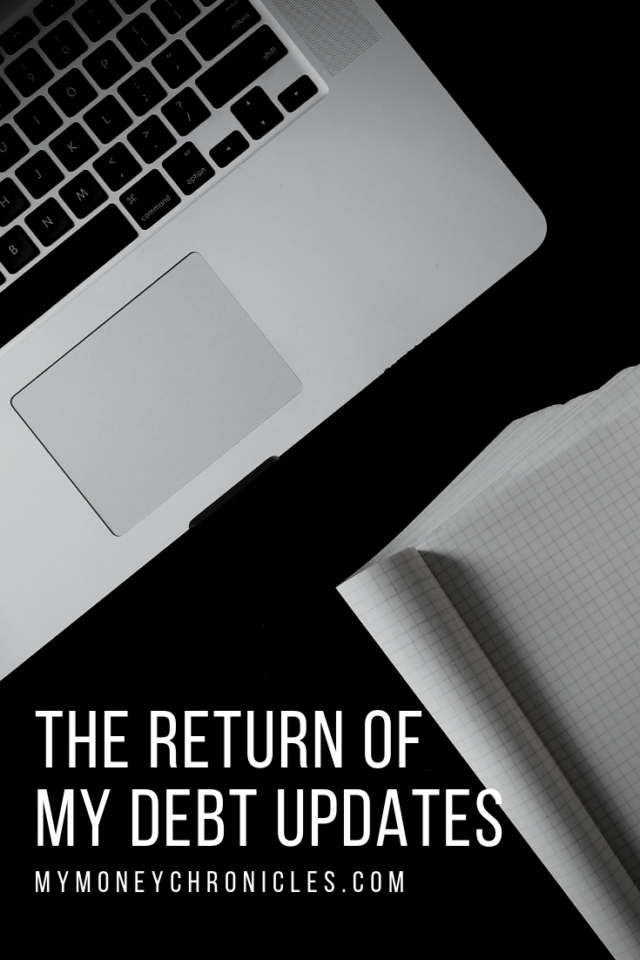 Happy August everyone! I hope that all is well with you. If you read my mid-year update you saw that a lot of things have been happening, I have a new job and a new side hustle. I can finally make debt payments that will truly make the debt get smaller. It’s been a long time coming. My last debt update was in March. In April, I decided to put the updates on hiatus. I was still paying on my debt, but I wasn’t posting an update on the blog each month. Leading up to March, the decreases were only between $200-$300 per month. While it was cool that the debt was slowly getting smaller, that wasn’t enough for me. I wanted to add more. This post is titled the return of my debt updates for a reason.

During the last four months, I talked with my inner circle and a couple of them told me that while I was doing good, it wasn’t enough. To really make a dent in the debt, I needed to make more money. I started seriously applying for jobs and tried a couple of new side hustles. Doing the unknown is exactly what I needed to do. Like I said earlier, I started a new job in late July. I also started delivering food with Door Dash and Uber Eats.

The Return of my debt updates

The new job and side hustle will allow me to bring in at least another thousand bucks per month. This will be HUGE for me. Guess where that money will be going? It will be added to my debt.

The first new debt update will be at the end of the month. The new amount that I owe is $68,025.83. In March, it was $65,620.75. The amount went up by $2405.08. It’s supposed to be going down, not up! I have four debts that I’m currently paying off. They are my Discover credit card, my car note, Nelnet loan, and Earnest student loan. Below are some details about each debt, plus the amounts that I owed on them in March.

Discover card wasn’t even on the last update. My Bank of America card was on it though. On that update, I owed $1231.37. Since that time, I had a slight dental emergency come up and I used the card a couple of times that I shouldn’t have. I did a balance transfer and moved toe BOA balance to this new Discover card. I don’t have to pay interest on it for over a year. It will be eliminated way before then.

Refinance your loans and get $200 with Earnest. Click here for more info!

The Nelnet loan is the one that blows me the most. It increased by a few hundred bucks. For about 8 months the payment has been going towards interest. Nothing has been applied to the principal. It has been creeping up every month. If you look at my previous debt updates, you’ll see that I put the word “same” beside it. I’m going to add more to the amount that I’m paying on this loan because I have to see it get smaller. I know an extra $30 or $40 will help. I’m sick and tired of the payment going towards interest.

This is year four of the debt repayment for me. I’ve had a lot of ups and downs during this time. I keep it real when I tell people my story. I messed up a few times and I also wasn’t as serious as I should have been. Something began to click after my failure last year. I knew that it was time to make a change. It took a while, but the changes happened in July. I’m poised and ready to one day become debt-free. I now have the mindset and faith that it will happen.