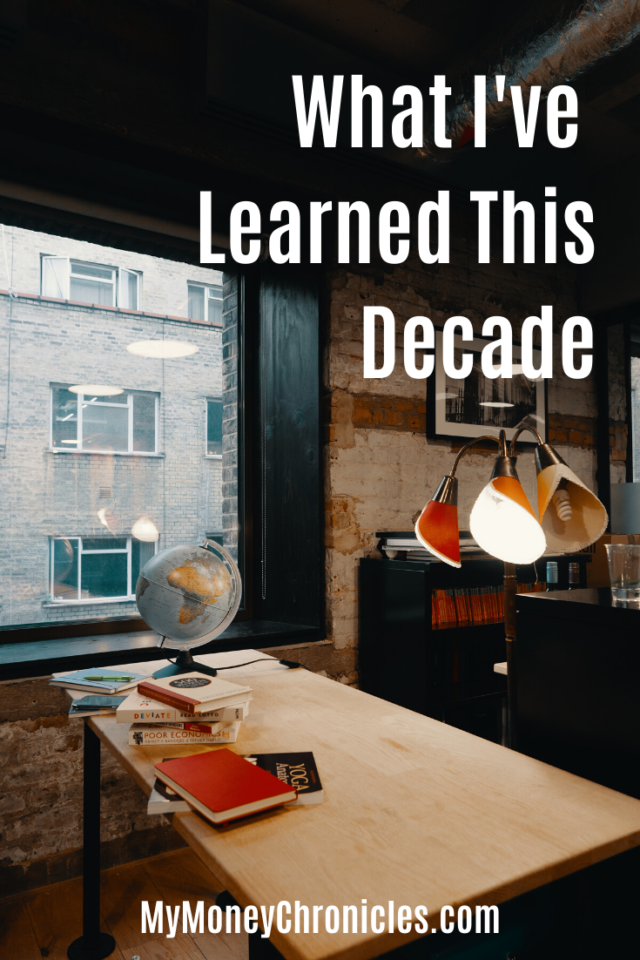 In a few days, the 2010s will be finished and we’ll be in another decade. Can you believe it? The roaring 20s will be here. A lot has happened during this decade. There have been some interesting times. I came into this decade 26 and finally working a full-time job. The beginning years of the decade were full of ups and downs. I worked a couple of underpaying jobs. I wasn’t always happy with my decisions. I had a couple of personal losses and I was broke.

As we moved to the middle of the decade, there became a shift. I started a new job, decided to get serious about my finances and started paying more attention to my blog. I also found out about this conference called FinCon.

Now at the end of the decade, I find myself working another new job, being an eBay store owner, and a man with a plan. As you just read, I’ve gone through a lot this decade. In today’s post, I’m going to share with you some of the things that I’ve learned this decade.

Nike’s slogan is “Just do it“. They were on to something when they came up with it. As I’m getting older, it’s a slogan that I take to heart. If there’s something that you want to do, just do it. What are you waiting for? The time will never be perfect. You have to just do it. If you want to start a blog, do it! If you’re thinking about creating a podcast, make it happen. Sometimes in life, you have to do something radical or out of the norm for you. It could end up being one of the best things to happen to you.

An example of that happened in 2013. I talk about this a couple of times per year on the blog, so if you’ve been a supporter for a while, you’ve heard this story. I quit a previous job (without a plan) due to the fact that it was stagnant. Then, I proceeded to travel across the country. I was nervous because I had never been on a trip that long, but I’m glad that I did it.

The trip was epic. I pushed myself and expanded my comfort zone. I had wanted to drive across the country since 2008. Five years later, I was able to make it happen. If there’s something that you want to do, don’t wait, just do it.

Looking back at it, some of the shit that I used to do earlier this decade was not the smartest. I made some stupid decisions at times. I thank God for the growth because it was needed. I party less and I also spend less money. That’s part of my growth. There’s no way that I can grow a business being in the streets all the time. If you’re reading this and you’re at a crossroads, you may need to look in the mirror and figure out what you need to change. Your future self will thank you.

Not Getting Any Younger

Losing my Grandma in 2013 was one of the moments that hit me and got me focused on life. I realized that I’m not getting any younger. The time is now to start working on a legacy. Seeing your friends and family progress during the years also shows me that I’m not getting any younger. People are getting older and slowing down a bit, while others are having kids and getting married. Two of my close friends had kids this year. Seeing them become parents lets me know that it’s time for me to get to work and create the life that I want to have.

I spoke at the Plutus Voices event in Atlanta a few months ago. We discussed money and transparency. I gave a brief talk about how I bounced back from hitting rock bottom. In life, things are going to happen. I want you to know that as long as you’re breathing you can bounce back. It may not be easy, but you can do it.

Everybody is Not Gonna Make It With You

As you grow and continue to become a better person, you will realize that everyone isn’t doing the same. I know people that brag about things they did 20 years ago. We were teenagers then. Has nothing happened in your life since then? If you know people like that, you have to limit your time around them. Remember, you are who you spend your time around.

Compared to 2010, my circle is much smaller now. I had to distance myself from some people. It’s nothing personal. People grow apart. If you’re constantly trying to do things that you did back in college, I can’t rock with you. Also, if your energy is off, I have to distance myself. I want to feel good around my friends, not uptight or guarded.

Discipline is the Key

Discipline has helped me become a better person this decade. If I didn’t become more disciplined this website and my eBay business would not exist. The sacrifices that I’ve made have been working out. I’m excited to see what happens in the 20s.

The Failures Make You Stronger

I’ve had my fair share of failures this decade. Some side hustles didn’t work, some relationships failed. Hell, I didn’t pay off my debt within three years. I could let those failures bring me down or I could say screw them and keep it moving. I decided to keep it moving. I learned from every single failure. To me, they’re not even failures. They are life lessons. If you’ve failed at something, don’t give up. Try something else and keep going.

In this decade, I’ve wrecked two cars, had teeth extracted and a couple of other random things came up. All I can do is say, SAVE SOME MONEY! If I didn’t have any money saved, I would be in even more debt. Things happen. Having money saved will help you out.

The final thing that I learned this decade is that I really enjoy eBay. I remember when I started posting about it a little back in the early days of my site.

In those posts, I was only selling a couple of items here and there. Hell, in one of the posts, I shared that I had finally got up to having 21 items active in my store. That was a while ago. It’s amazing to see where I’ve come and I’m excited to see where I’ll be in the upcoming years.

The 2010s was an alright decade. To be honest, I’m not sure how I feel about it though. I look back at the 2000s and have an overall positive feeling about those years. I was in college for a lot of the decade. Also, I had less stress as well. The 2010s had some very good moments, but I had some rough times and felt like a robot a lot from 2011-2015. My past mistakes are probably part of the reason why I feel like that. At the end of the day, I learned a lot this decade. I realize what I like and I also know what I don’t want to be doing for the next 30-40 years of my life. I’m ready to make it happen in 2020.

What have you learned this decade?