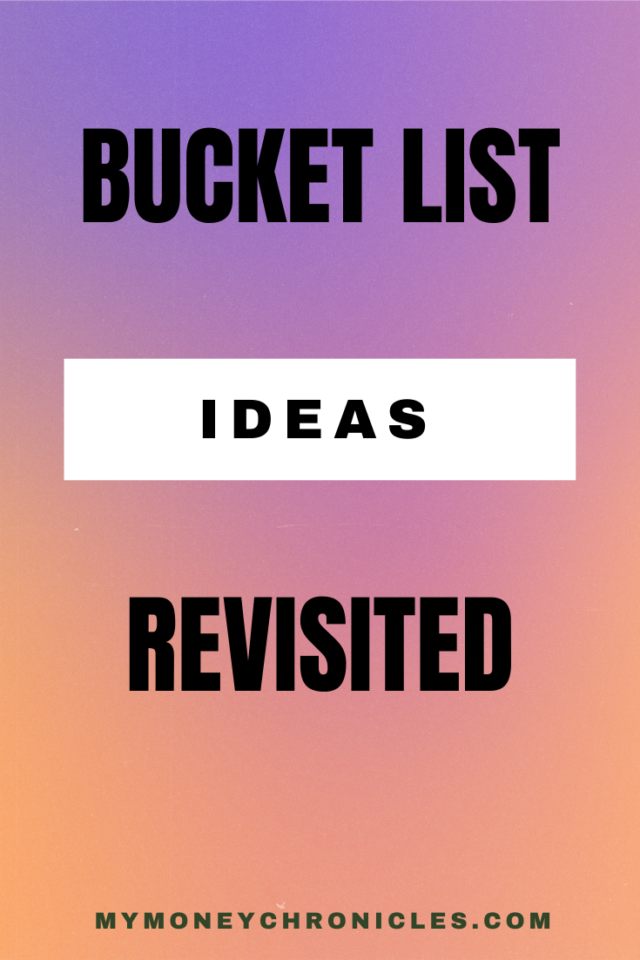 In May 2013, I wrote a post titled, what’s on your bucket list? At the time, I was 29 years old and preparing to leave a job that I didn’t like. A lot has changed in the five years since. My bucket list ideas are not the same anymore.  Today, I want to review the things that were on the original post and share with you if I achieved them or not. I also want to go over my new and improved bucket list. I’ll be sharing five of my new bucket list ideas. These are things that I want to do. Let’s start off by going over the 2013 list.

I haven’t completed this goal yet. I’ve seen between 30 – 40 stadiums in person. I’ve also been to 16 MLB Stadiums. If all goes well, I’ll be attending another three this year. When I’m in a different city watching a baseball game, I usually find the NFL & NBA arenas and take a picture of them if there’s one in that particular city. Below are pictures of a few of the stadiums and arenas that I’ve seen.

I still can’t speak much Spanish. At one point, I was taking classes every Saturday, but that stopped when I started working a part-time job. I haven’t seriously thought about Spanish lessons since then. I will eventually get back on it when I find the time.

I haven’t been camping. One day I may get to it, but it’s not on my radar at all. It didn’t make my new bucket list ideas either.

Drive across the country

I drove across the United States of America from July 1st – July 14th in 2013. It was an epic trip. I would do it again in a heartbeat. I learned so much about myself on that trip. My comfort zone expanded. I drove through nine states, went to three MLB baseball games and even had the chance to be a contestant on The Price is Right game show.

I want to do another cross-country trip eventually. This time, I want it to be by train. I want to go from Massachusetts to Washington State.

Sit courtside at an NBA game

I’ve had some pretty good seats at some NBA games, but I haven’t set courtside yet. My favorite team is the Atlanta Hawks. If they continue to be sorry, I may be able to afford courtside tickets to a home game by the beginning of next season.

Live in another country for a year

I haven’t remotely tried to make this happen. I’ve had ups and downs with this dent, moving to another country isn’t important to me right now. I don’t even know if I would want to move to another country for a year. I’m at the point where I probably want to just do some extended traveling. For example, stay in London for a couple of weeks and then move on to Paris or someplace.

I’ve created over 20 designs since then. I used to sell my items via Big Cartel. I don’t even use that site anymore. After I had some losses with a few of my designs, I stopped printing them out myself and started using print on demand sites such as Teespring, Sunfrog, and recently Merch By Amazon. I love Teespring. I’ve had a decent amount of sales with them for the last couple of years. I just started listing shirt designs on Merch a couple of months ago. Right now, I haven’t sold anything yet, but that will change soon. I’m adding some new designs to their site this month.

Check out some of my designs on Teespring here

Own property in 2 states

This will eventually happen, but not for a few years. Again, eliminating my student loan debt is one of the most important things to me right now. Once that debt is paid off, I’ll then focus on investing in some property.

This is the bucket list item that will never happen. Prince passed away in 2016. I could have gone to see him perform, but I didn’t feel like using my credit card because I was trying to do the adult thing and not use it. Well, that was a big mistake. Prince ended up passing a few days after his Atlanta concert. I don’t have many regrets in life, but missing out on that concert is one. Since then I’ve vowed not to wait and to do something like I really wanted to. I may not get another chance. That was a wake-up call for me. That’s one of the reasons that I’m still traveling from time to time. I’ve sacrificed a lot during this debt payoff that I’m doing, but I’m not giving up travel. If that adds an extra year or two to my debt payoff, so be it. I’m not in the mood to be living a life of regrets or what-ifs.

Those were my previous bucket list ideas. Here are five things that are on my current bucket list.

Visit another country for 2-6 months

As I stated above, I’m not sure if I want to live in another country for a year anymore, but I definitely want to visit one for an extended time period. As of right now, the only want that I can see that happening is to become location independent. That leads me to the third item on my new bucket list.

Becoming financially free will allow me to whatever the hell I want to, including being location independent. With hard work and discipline, this will happen. I follow some cool bloggers that are already financially free. The one thing that they all stress is having multiple streams of income. It is the way to go. That’s why I have my hands in different side hustles.

Take my family on an all-expenses trip somewhere

I want to take my family on an all-expenses paid trip one of these days. I’m not sure where tom but they deserve it. A lot of my family hasn’t had the chance to travel as much as I have. There are some beautiful places in this world. I want them to get a chance to see more of it.

Make 10K plus a month in side hustle income

This is a bucket list goal that I want to happen consistently. Making 10K a month would be life-changing. I’d be able to help more people, and I’ll be able to do more of what I want.

As you can see, I have a few different bucket list ideas than I did in 2013. As I’ve gotten older, some things have changed. I’m going to work hard to make these goals happen.