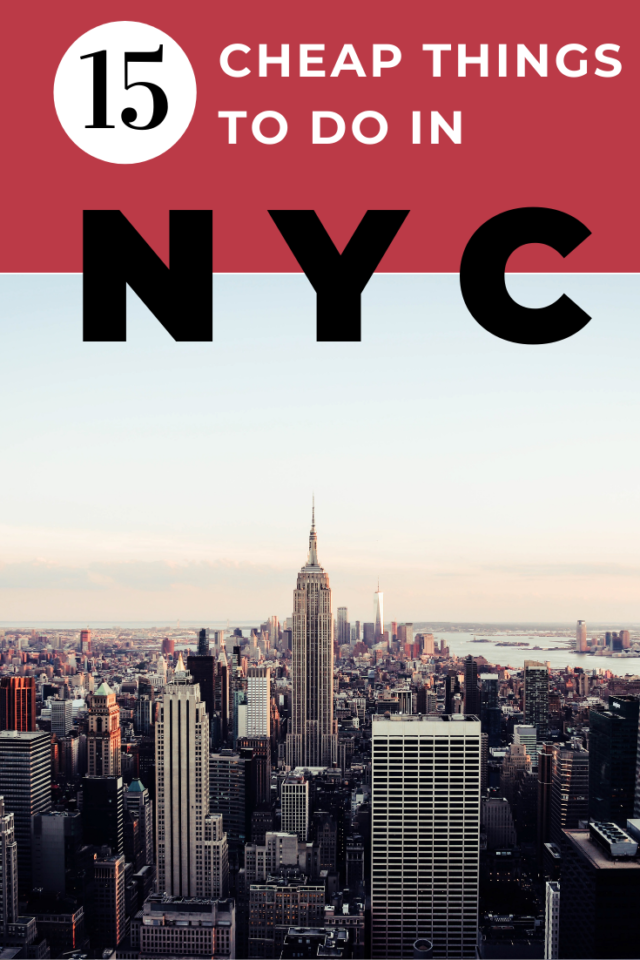 New York City is known as the city that never sleeps. There are tons of things to do. Some of them are expensive while others are cheap. If you are taking a trip to the Big Apple, we want to ensure that you have a good time and save money. Today, I want to share with you 15 cheap things to do in NYC.

If you are a Major League Baseball fan, you must check out Yankee Stadium. This version of Yankee Stadium was opened in 2009. It is home to the 27-time World Series Champions, the New York Yankees. Even if you are a Yankee hater like me, you must experience a game there.  Try to get there a couple of hours before the game to visit Monument Park. It features monuments of all the past Yankee greats.

If you see Yankee Stadium, you should also check out Citi Field. It’s the home of the New York Mets. This stadium is located in Queens. I went to a game there and saw my Braves beat the Mets. That made the experience even better.

If you get a chance, visit the Brooklyn Bridge. It’s one of the most iconic bridges in the country. You can walk it from Brooklyn to Manhattan or vice versa. If you don’t want to do that, you can take some nice pictures of it.

I’ve visited New York City three times before, and this was my first time visiting Central Park. I’m starting to enjoy the outdoors more the older I get. I routinely visit and exercise at parks in Atlanta, so it was only right to visit Central Park. The park is enormous. It covers 843 acres. I walked around and saw some of the areas near Central Park North. I’ll check out more of it the next time I visit NYC.

The Apollo Theater is located in Harlem. It is a world-famous venue for African American performers. The variety series, Showtime at the Apollo, is filmed there. The Apollo Theater draws over 1 million visitors each year.

You can’t come to New York City and not at least take a picture of the Empire State Building. There are observation decks on the 86th and 102nd floors. I don’t like heights, so I didn’t even think about going up there, but I’ve heard that the views are amazing.

You must visit Juliana’s if you want some great New York City pizza. It’s located in Brooklyn. The owner is Patsy Grimaldi, who originally owned the famous Grimaldi’s Pizzeria.  He sold Patsy sold Grimaldi’s in the late ’90s but came out of retirement to open Juliana’s in 2012.

The next thing on the list of cheap things to do in NYC is to visit the New York Stock Exchange. Unfortunately, it’s not open for tours, but you can take pictures of the building. Wall Street and the Charging Bull are also nearby.

The Metropolitan Museum of Art

The huge Metropolitan Museum of Art presents over 5,000 years of art worldwide for everyone to see and appreciate. The Museum is in two iconic New York City locations—The Met Fifth Avenue and The Met Cloisters. You also have the opportunity to take part in The Met experience online. It is the largest gallery in the United States and allows you to explore exhibits like Chinese calligraphy, Classical sculpture, Egyptian mummies, Old Masters, Moorish textiles, Sumerian cuneiform tablets, Rococo fashion, armor worn by European monarchs, invaluable musical instruments, and many more.

The collection is so huge that spending a whole at the Metropolitan Museum of Art will never be enough to see all of it. Some of the significant exhibits are the Rembrandt’s Aristotle with a Bust of Homer (1653), Egyptian Temple of Dendur (15BC), Washington Crossing the Delaware by Emanuel Leutze (1851), van Gogh’s Self Portrait with Straw Hat (1887) and Raphael’s altar painting of Madonna and Child (1504).

Located at the World Trade Center site, The National 9/11 Memorial & Museum is a memorial and museum in New York City paying tribute to the September 11, 2001 attacks, where 2,977 innocent people died and the six who died in the 1993 World Trade Center bombing. The site has twin reflecting pools which are an acre in size. It marks out the exact footprints of the Twin Towers and is surrounded by the largest man-made waterfalls in North America.
The names of all the victims who died in the two attacks are inscribed on 152 bronze parapets surrounding these pools. The monumental Last Column, fragments from the aircraft and a damaged fire truck are among the exhibits you will find here.

Since 1886, people moving to New York for a shot at a new life would be welcomed by this inspiring icon of freedom. The design was done by Frédéric Auguste Bartholdi, a French sculptor, and its metal framework was built by Gustave Eiffel. The Statue of Liberty is 93-meter tall and symbolizes the Roman goddess Libertas. You can see her holding a torch upwards in her right hand and in her left carries a tabula ansata (tablet) showing the date of the U.S. Declaration of Independence, “JULY IV MDCCLXXVI” (4th of July, 1776, in Roman numerals). Moving forward, free of the broken shackles and chains that lie at her feet, celebrating the national abolition of slavery.
Trips to the top of the crown are highly requested, so remember to book in advance.

Rockefeller Center is a large complex made up of 19 commercial buildings (14 Art Deco, five International Style) spread across 22 acres in Midtown Manhattan, New York City. Separated by a large sunken square and a private street called Rockefeller Plaza, all commissioned by the Rockefeller family, who first made their fortune in the American petroleum industry. It was built during the Great Depression and was regarded as the greatest projects of that era. In 1985, it was declared a New York City landmark and a National Historic Landmark in 1987.
You would have noticed some of these attractions in movies before, the Atlas statue (1936) facing St Patrick’s Cathedral across Fifth Avenue, Prometheus (1934) at the western end of the sunken plaza, the much-loved skating rink, and the famous Rockefeller Center Christmas tree.

The Staten Island Ferry is among the best free things you can do in New York. It operates across the Upper New York Bay, 24 hours a day, 7 days a week. Before the bridges were constructed, the residents of the city used the ferry services to move across the waterways. It is among the last survivors of a whole system of ferries. The route between Whitehall Street and St George on Staten Island is used by 22 million a year, and the journey takes about 25 minutes. The trip will give you an amazing view of the Statue of Liberty and Ellis Island along with the skyscrapers and bridges of Lower Manhattan.

There are so many amazing things to do in NYC. I didn’t even get a chance to go to a show on Broadway to see the Statue of Liberty. I’ll have to do those things next time. The city that never sleeps will have you busy all day. I enjoyed my time in NYC and can’t wait until I visit again.

What’s on your list of cheap things to do in NYC?

I’ve been able to use airline points for many of my flights this year. I applied for the Southwest Rapid Rewards Credit Card earlier this year. I was able to get 50,000 airline points by spending a certain amount within 90 days. To be honest, I haven’t even used half of those points yet. If you fly with Southwest and want to get the awards card, visit Southwest for more details.

Get tickets to any sporting concert or sporting at StubHub. I purchased the tickets to the Yankees and Mets games from there.

Get $5 off your first Lyft ride when you click this exclusive link. 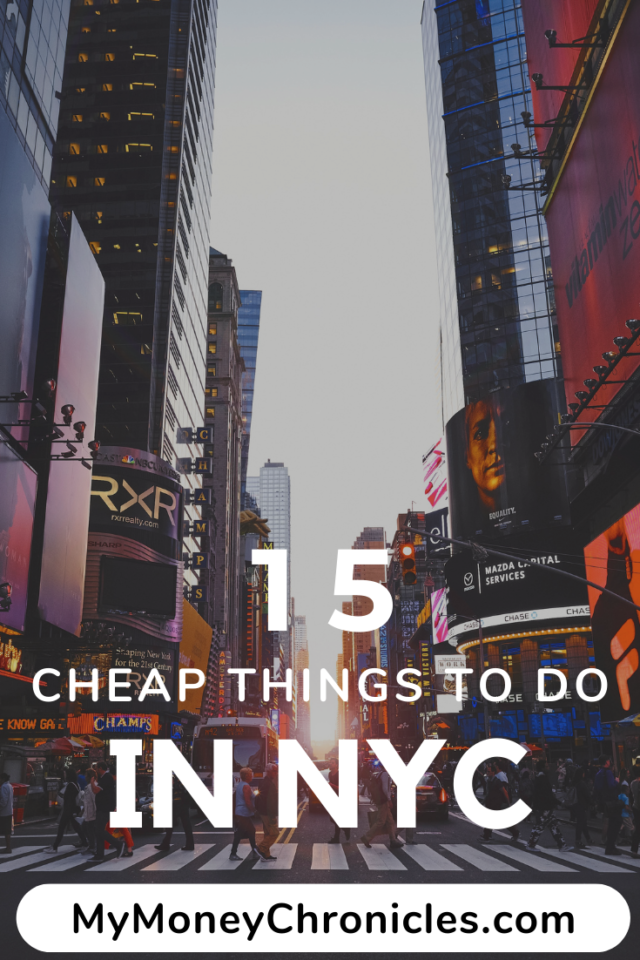