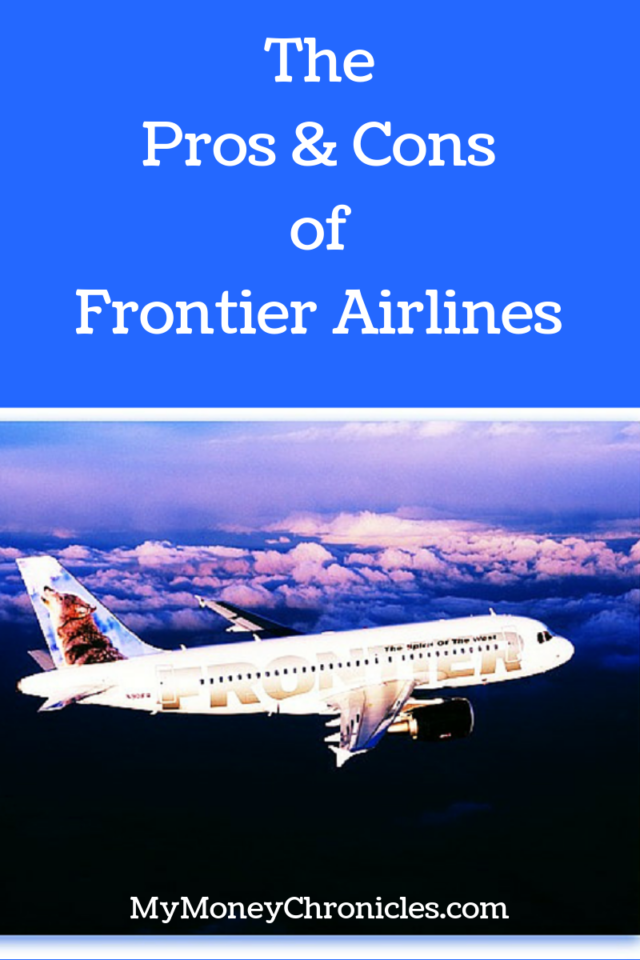 A few years ago, I had the opportunity to fly with Frontier Airlines. I can’t lie, I was a little nervous. The reviews for Frontier were not the best, but I wanted to stay within my budget. I booked a return flight from Las Vegas to Atlanta with them. I had a layover in Denver. The ticket was inexpensive, so I figured what the hell. In this post, I share some pros and cons of Frontier Airlines.

The first thing that I must say is that when booking a flight with Frontier, you have to make sure that you read their policies. The website explains EVERYTHING from baggage fees to info about snacks. I can guarantee that half the people that left negative reviews about Frontier on Yelp did not read the policy information on their site. I’m sure that most of their problems would not have happened if they would have taken a couple of extra minutes to read it. It’s similar to many people being mad about Spirit Airlines because they don’t read everything.

Below are the pros and cons of my trip.

As stated earlier I flew from Las Vegas to Denver, then from Denver to Atlanta. Both of the flights were on time. There weren’t any delays or anything else wrong. With the flights being on time, that meant that I’d get to my destination on time. That was good because I only had a few days in Vegas this go-round. If you’ve ever flown before, you know how important it is to get to your destination on time.

Both of the planes that I flew on were clean. I had read a couple of reviews where people said there was a little trash on the ground under the seat in front of them. I didn’t see anything like that. The bathrooms were even clean. A clean plane makes the flying experience so much better. If you’ve ever flown on a plane that wasn’t 100% up to par, you know exactly what I’m talking about.

The flight attendants were very nice. They even explained the snack menu in detail to an older couple that was seated in front of me. They seemed legitimately happy to be working for the airlines. I’m not sure how many times you’ve flown, but that is not always the case. They were really on their game.

I stated earlier that the ticket price was inexpensive. I’m going to get into details about that now. My flight cost $119. That was an excellent price for a one-way ticket going out west. I only had to pay $20 to check my bag. That made my total charges to Frontier $139. You can’t beat that, especially for a flight to Las Vegas. Frontier seems to have pretty good prices for most of their destinations. To make sure that you get the best ticket price, book your flight a few weeks in advance. For this flight, I booked mine 6 weeks before the trip.

The plane had enough space for me. Reading some of the reviews, I thought people would be packed together like sardines or something. I’m glad that wasn’t the case. I could stretch out with no problems. If you have a carry-on, there is space for the bag above your seat. Just don’t go overboard. If your bag is too big, you will have to check it in.

One thing that could be a slight con is that the seats didn’t recline on either of the planes I was on. I know that could a big deal for some people. If you are over six feet, I’d suggest that you sit on the front wrong or the emergency row if you can. Even though I couldn’t recline my seat, it wasn’t really bad. If you want to get a little more comfortable, you can grab the travel pillow below.

This isn’t really that big of a con, but the majority of their planes don’t have Wi-Fi. That wasn’t a big deal to me. I slept and listened to music for the majority of my flights.

This concludes my post going over the pros and cons of Frontier Airlines. I had a better than expected experience flying with them. In my opinion, they are a little better than Spirit Airlines. I would probably fly with Frontier again if it saved me money.

How to Save Money on Travel

In this post, I share several ways that people can save money on travel. I travel several times per year. I’m not rich at all. I just know how to find deals and book at the right time. This post will give you information on how to do that.

I lived in Savannah, Georgia for 8 years. I had some of the best times down there. Some of those times happened during St. Partick’s day weekend. Did you know that Savannah has one of the biggest St. Patty’s Day celebrations in the country? Hundreds of thousands of people come down to Savannah every year to celebrate. This post features 10 tips that will help you have a great time.

Tips For Traveling in Europe

In 2019, I had the chance to go to Europe for 9 days. It was an amazing experience.  If you like to travel, I’d suggest that you add Europe to your itinerary. Make sure you read this post before you book your flight.

The Best Places to Visit In Paris

Paris was one of the best parts of my Europe trip. I really enjoyed that city. This article features some of the best places to visit in Paris.

How to Plan an Epic Cross Country Road Trip

Have you ever considered doing a cross country road trip? I did one in 2013 and it changed my life. Many people think that traveling coast to coast will cost them an arm and a leg. It’s not as expensive as you think. Check this post for tips.