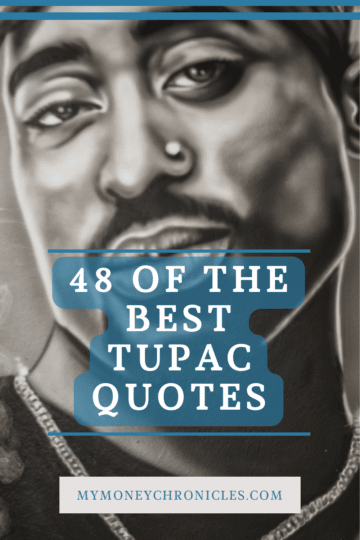 Considered one of the most influential rappers ever, Tupac Amaru Shakur undeniably left his mark in the music industry. Many people (including myself) even call him the greatest hip-hop artist of all time, having sold more than 75 million records worldwide.

Tupac was born to Alice Faye Williams (Afeni Shakur) on June 16, 1971, in East Harlem, NY.  Afeni was a former Black Panther.  2Pac attended the elite Baltimore School for the Arts, which nurtured and boomed his creativity. However, his family moved to Marin City, California before he could graduate.

His new neighborhood was riddled with crimes. His mother also developed a crack addiction at this time.

Even though he lived in an unhealthy environment, 2Pac managed to stay away from a criminal lifestyle for some time and joined Digital Underground, an Oakland-based rap group that had scored a Billboard Top 40 hit. He started his career as an MC and backup dancer. He did these for a while before he started evolving into the voice for his generation. 2Pac did this by using lyrics that passed powerful messages and stories surrounding violence, racism, and other social challenges. His legacy is not just about being a great rapper with “ sick metaphors and rhymes, but he is an all-in-one artist. 2Pac could act, had what it took to be a dancer, and is a creative poet.

Although his career was pretty short, undoubtedly, he absolutely made an impression during this period. He debuted in the movie industry with his breakthrough role as a high school teen who was troubled and then transformed into a cold heart killer in the 1992 Juice.

2Pac redefined the word “thug” even creating an acronym for “thug life” He was involved in several conflicts. However, he always showed wisdom, responsibility, and a soft side of himself simultaneously. As hip-hop tension and rivalry began to grow between the East Coast (including Bad Boy Records) and the West Coast (Death Row Records). 2Pac also participated in this rivalry and was very vocal about it. The song Hit ’em Up is one of the greatest diss records of all time.

After all these, things went south: the rivalry escalated quickly, and he was killed in a drive-by shooting at age 25.

“What doesn’t kill me only makes me stronger. I see no reason why everyone feels as though they have to tell me how to live my life.”

“I strive to be better. I grow. You grow. We all grow. We were created to grow. You either evolve or you disappear..”

“Reality is wrong. Dreams are for real.”

“Whatever you see you gotta keep a sense of humor: you gotta be able to smile through all this bullshit.”

“They got money for wars, but can’t feed the poor.”

“The broken will always be able to love harder than the most. Once you have been in the dark, you learn to appreciate everything that shines.”

“With all my fans I have a family again.”

“Things will never be the same. That’s just the way it is.”

“I’d rather die like a man than live my life as a coward.”

“I know it seems hard sometimes but remember one thing. Through every dark night, there’s a bright day after that. So no matter how hard it gets, stick your chest out, keep your head up and handle it.”

“Is it a crime to fight for what is mine?”

“No one knows my struggle; they can only see the trouble. Not knowing it’s hard to carry on when no one loves you.”

“Don’t leave this world without giving it your all.”

“Even though you’re fed up, you gotta keep your head up.”

“We were young and we were dumb, but we had a heart.”

“All I’m striving to do is survive and make good out of the dirty, nasty, and unbelievable lifestyle that they gave me.”

“A woman drives you into this world, so you have no right to disrespect one.”

“There’s nobody in the business strong enough to scare me.”

“The realest people don’t have a lot of friends.”

“Life is a wheel of fortune and it’s my chance to spin it.”

“It all seems as if every time you come up, something always happens to bring you back down.”

“Happy are those who dream dreams and are ready to pay the price to make them come true.”

“The only time I have problems is when I sleep.”

“You can spend minutes, hours, days, weeks, or even months over-analyzing a situation; trying to put the pieces together, justifying what could have or would have happened… or you can just leave the pieces on the floor and move on with your life.”

“Always do your best, don’t let the pressure make you panic.”

“I set goals, take control, drink out of my own bottle. I make mistakes but I learn from each of them. And when all is said and done, I bet this brother will be a better one. If I upset you, don’t stress. Never forget that God is not finished with me yet.”

“Did you hear about the rose that grew from a crack in the concrete? Proving that nature’s law is wrong, it learned to walk without having feet.”

“Never surrender. It’s all about the level of faith you got: don’t ever stop, just keep pushing until you hit the top, and if you drop, at least you know you gave your all to be true to you. That way, you can never fall.”

“I’m 23 years old. I might just be my mother’s child but in all reality, I’m everybody’s child. Nobody raised me; I was raised in this society.”

“I feel like our future is our confidence and self-esteem.”

“I think I’m a natural-born leader. I know how to bow down to authority if it’s authority that I respect.”

“It’s the game of life. Do I win or do I lose? One day they’re gonna shut the game down. I gotta have as much fun and go around the board as many times as I can before it’s my turn to leave.”

“I just spent 11 and a half months in a maximum-security jail; got shot five times and was wrongly convicted of a crime I didn’t commit.”

“A coward dies a thousand deaths. A soldier dies but once.”

“During your life, never stop dreaming. No one can take away your dreams.”

“My biggest fear of death is to come back reincarnated.”

“Don’t change on me. Don’t extort me unless you intend to do it forever.”

“Be an individual, work hard, study, get your mind straight, and trust nobody.”

Check out some of 2pac’s music and movies below.

What is your favorite 2pac quote?