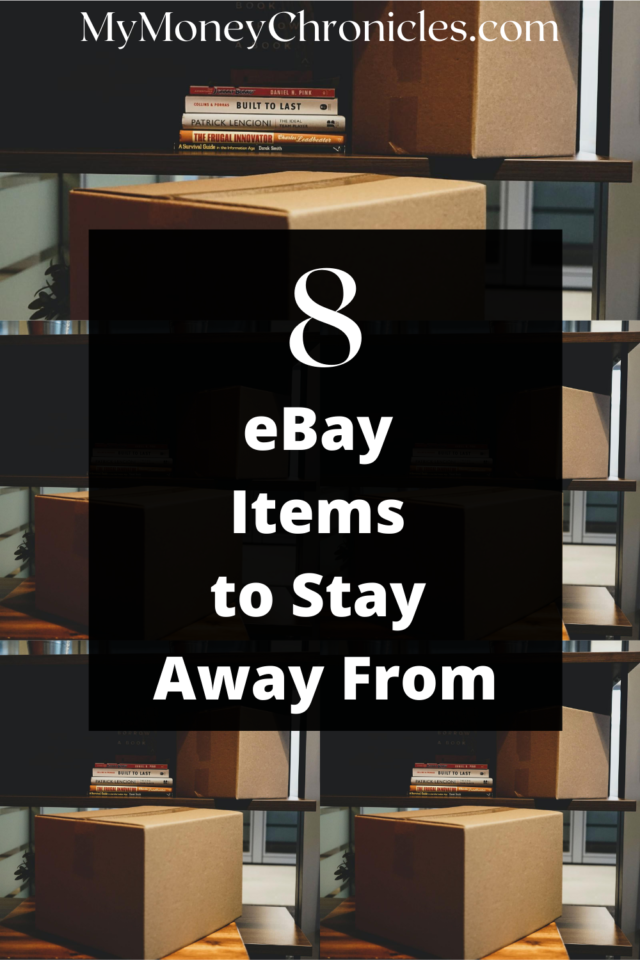 Have you ever been in a situation where your eBay items are not selling? Nine times out of ten, we all have. There are several reasons why that could be happening. I actually discussed a few of them in this post. I talked about updating the pictures and changing descriptions. I won’t be going over any of that this time.

Have you ever considered that the reason your items aren’t selling is that nobody wants them? That could be a huge reason why the items are not selling on eBay. Today, I want to share 8 items that I probably won’t be selling again unless they are rare or if the comps look too good to pass. I already know that some people may disagree with a couple of things on this list. That’s fine. These are things that I choose not to sell.

At one time, you could make some decent money off beanie babies. That was YEARS ago. Most beanie babies are actually worthless. You may see some that have sold for a lot in the sold section. Don’t fall for that. Those are money laundering schemes. Nobody is paying thousands of bucks for any beanie babies. This market is oversaturated. If you are selling them, your best bet may be to sell them as a lot or even donate them. I’d be happy to get any kind of profit if I sold beanie babies.

A couple of years ago, I sold a few Kentucky Derby glasses. It was a pretty good flip, so I decided to grab a few more if I saw them. I figured that they would sell quickly and be another nice flip. I purchased them in 2018. The Kentucky Derby glasses sold in July of 2020. They had been in my apartment collecting dust. As a seller, I can’t have that happening with my merchandise. I need items that will sell pretty quickly. Because the glasses took forever to sell, I don’t plan on wasting my time with them ever again unless they are a certain year. Kentucky Derby glasses that are from 1960 or older actually sell pretty well. It also doesn’t take them 2 years to sell either.

Next up on the list of items not selling on eBay are certain VHS tapes. I will always look for blank VHS tapes. They sell well depending on the brand. I purchased some Star Trek VHS tapes thinking that they were going to sell quickly. I figured that because they were sealed and that the show was a classic, that I’d have no problem flipping them. This item took damn near 3 years to sell. I think I made a profit of one dollar on them. Never again will I waste my time with VHS tapes that are not blank.

Need help selling on eBay? Check out my webinar, eBay for Starters.

Starbucks Coffee mugs are one of my favorite items to flip. They always sell. Some do take longer than others though. I branched out and attempted to sell some different kinds of mugs. It was basically a fail. I purchased some Elvis Presley mugs that I thought would sell quickly. This is another item that took almost three years to flip. I currently have a vintage Miami Beach mug that I’m basically giving away for free because I’m tired of looking at it. The only kind of mugs that I’ll be looking to flip from now on is Starbucks.

This category can be hit or miss. For me, it was a miss most of the time. I’ve read that some sellers do well with ties. After buying a couple and selling them, I realized that this category just isn’t for me. I sat on two ties for over a year. The crazy thing is that the eBay app showed that the brand was selling well. I went from posting them in a lot to posting them solo. I even retook the pictures. They ended up selling on another platform. I’m good when it comes to selling ties from now on.

This is the one where I’m shocked at the most. Car Owner Manuals sell. Some go for good money. I was able to get 24 of them about three years ago. I still have more than half of them as of this writing (August 2020). It sucks because I thought this was going to be a big flip. I currently have them listed solo and as a lot. I just want them out of my apartment. That space on the shelf can be used for other items.

I received some free books a couple of years ago. I’m usually not a book person unless I get them for free anyway. I did my research on these books and figured that they would sell. I even set a competitive price. Nothing has happened with these books. I may end up donating them or putting them together in a huge lot and selling them on Facebook Marketplace and Craigslist.

The last thing on thing on the items not selling on eBay list are Funko Pops. These items are the new Beanie Babies. The market is super oversaturated. Believe it or not, I’ve had success with Funko Pops before. I sold one for $100 and another for $50. Most of the ones that I’ve flipped, sold for $15 or below. This is the one item on this list that I’ll still scan from time to time. In most cases, they are just not worth buying to flip. The margins are not there.

You’ve just finished reading my personal list of items not selling on eBay. I hope that you are more successful if you sell any of these things than I am. I know that people are probably making money off some of these things. They just weren’t for me.

What are one or two items that you won’t sell anymore on eBay?

Not sure what items you should be selling? Check out this post I wrote a while back. It features 40+ items that you can flip on eBay today.