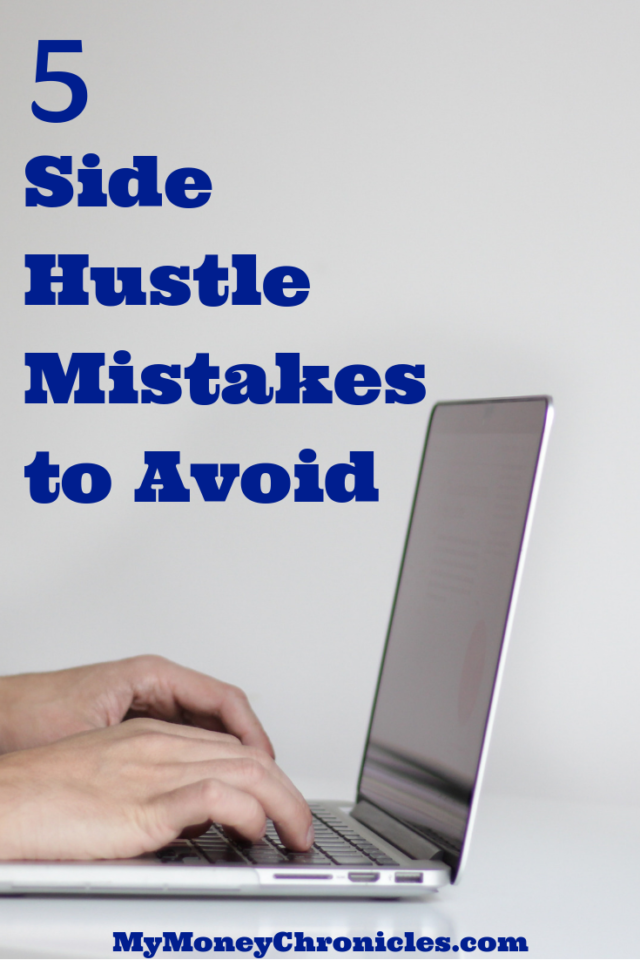 What’s going on everyone? Raise your hand if you like a good side hustle. I’m sure many of you raised your hands. If you’ve been reading my site for a while, you know that I love a good side hustle. Side hustling has changed my life. I’ve been able to pay off some debt, save an emergency fund, and do other things because of the side hustles.

Doing too many things at once

Sometimes people can want to change their financial situation so badly that they try to do multiple side hustles at one time. In most cases that will not work. Attempting to do too many side hustles is not the best idea. You can spread yourself way too thin. For example, how could you expect to make a lot of side hustle money if you are driving for Uber, freelance writing, doing odd jobs, and taking surveys on Swagbucks? You won’t make nearly as much money trying to do all four of them as you would if you focused on two. I’d focus on the two that you like best.

In the past, I made a huge mistake in trying to do too many side hustles. I failed miserably. My side hustle income started growing for the better when I focused on 2-3 side hustles. Narrowing down your list can be difficult for some, but you have to focus on 2-3 of them. Once you start making money from a couple of them and have a good system in place, then you can try some more. Just make sure that the income from the successful side hustles doesn’t suffer. You should also try a new side hustle if your previous ones didn’t make any money.

Not understanding a side hustle

Sometimes people attempt a side hustle without truly understanding it all the way. They do it because they see everyone else doing it. Doing that will waste your time, and it will potentially cost you money. I’ve seen a lot of people start blogging as a side hustle. They saw others doing it and immediately jumped into it. Three months later, they’ve stopped blogging and they also wasted money on a domain and hosting. They didn’t understand the work that comes with maintaining a successful blog. Before you choose a side hustle, make sure that you know everything about it. You will save yourself time and money by doing that.

I hate pyramid schemes. I fell for two of them before. I’ll discuss one of them here. The summer after my freshman year in college, I joined a company that promoted Noni Juice. Back then, Noni juice was the wave. The juice was made in Tahiti. It supposedly helped people with a lot of ailments such as high blood pressure and weight loss. It also was supposed to give people more energy. They had a great payout plan that showed how much money you could make with the company. All you had to do was pay a one-time startup fee, a monthly fee and sell about four bottles of the juice per month (The juice cost $40 per bottle). You could also make money by getting people to sign up under you. You would get a percentage of their sales each month.

As a 19-year-old, I ate that shit up. I couldn’t wait to make a lot of money selling Noni juice. A few months went by, and I quit. It was harder than I thought it would be. I sold about 5-6 bottles during my time. For selling those bottles, I got for a whopping $18. At that moment, I was angry that I wasted my time. Now I’m glad that I went through that experience. It was a hell of a learning lesson. I try to help my friends now and steer them clear of pyramid schemes.

If you’re on FB, you’ve seen several of these pyramid schemes over the years. Wake up now, 5 Linx, and Iso Tea is just a few of them that were out there. The people that used to bug you and jump in your inbox asking you if you had time to come to a presentation were not making any real money. If they were, all their posts wouldn’t be about trying to get 5 – 10 more people to sign up.

Doing a side hustle because your friends are

We all have friends that do different side hustles. Some of them may want you to join a program or participate in a side hustle that they are doing If you are not comfortable with it, then don’t do it. You don’t owe your friends anything. If they keep asking or bugging you, ignore them. It may not be easy, but you can’t afford to waste your time doing a side hustle that you are not interested in.

This is another mistake that I made. When I first started freelancing, my rates were too low. I was just happy to have clients. That was one of the biggest mistakes that I made. I should have raised my rates earlier. I was writing a lot and not making nearly enough. After discussing things with my mastermind group, I doubled my rates. It made a big difference.

If you provide a service to someone make sure that you review your rates. Time is money. There is no reason that you shortchange yourself. Most of your clients shouldn’t have a problem if you raise your rates. If they do, you’ll find other clients that value you.

Many people including myself have made side hustle mistakes over the years. They happen from time to time. Don’t beat yourself up if you’ve made one. Learn from it and move on.

What side hustle mistakes have you made?