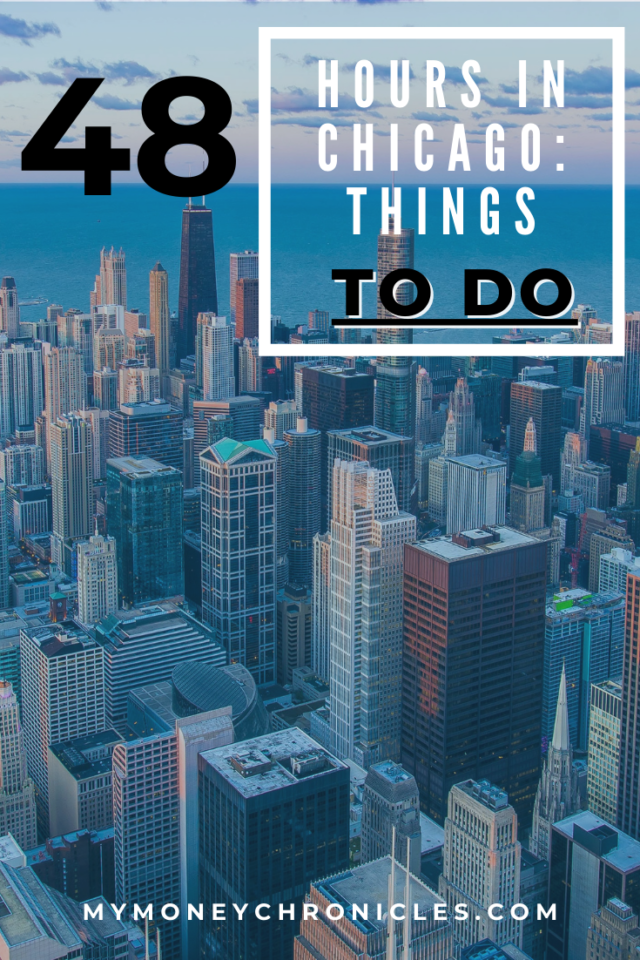 Chicago is one of the biggest cities in the United States.  There are tons of activities and tourist spots to visit. In this post, I want to share with you things to do in Chicago. If you only have 48 hours in Chicago, this post is perfect for you.

Things to do in Chicago

If you like to shop, you have to check out the Magnificent Mile. It’s a stretch of shopping on N Michigan Avenue. There are 460 retailers on the Mag Mile. They also have three malls in the area as well. They are The Shops at North Bridge, Water Tower Place, and 900 North Michigan Shops. There are also stores such as Levi’s and Niketown Chicago. You can also visit landmarks such as The Wrigley Building.

Three Dots and a Dash

One of my friends suggested that I check this place out. I’m glad I did. Three Dots and a Dash is a tiki bar located in downtown Chicago. It took us a second to find the place because the entrance was in a side alley. This place was nice on the inside. They didn’t have the biggest food selection, but that’s not their specialty. The drinks are. They had a lot of unique cocktails to choose from. Most of them included some rum.

Batter & Berries is a restaurant that serves breakfast, brunch, and lunch. They are known for their world-famous French toast. If you plan on going, get there early because they don’t take reservations. They do have a waitlist that you can put your name on. It took us about an hour to get a table, but we were prepared.  Batter and Berries is also a BYOB spot, so you can have a mimosa or bourbon with your French toast. This is a must-stop if you only have 48 hours in Chicago.

I might as well continue talking about food. Every time I go to Chicago, I visit Giordano’s. They have the best deep-dish pizza that I’ve ever had. A small pie will have you full, leaving you with a box of leftovers.  There are several locations to choose from in the Chicago area.

Believe it or not, Chicago has several beaches. I’ve visited North Avenue Beach before. It was a nice beach that allowed you to see Chicago’s wonderful skyline behind you. If you decide to visit North Avenue Beach, leave your alcohol at home. They have strict rules, and you could get locked up.

Many cities in the United States have Chinatowns. Chicago is one of those cities. There are a lot of shops and restaurants in the neighborhood. You can grab all kinds of things like tea, herbs, and more.

Next up on the list of things to do in Chicago is Safehouse Chicago. It was a spy bar and a restaurant. You have to know a password to get in. If you don’t, the person working the front will have you do a “task” to access the bar area. It won’t be anything too crazy. Once inside, you will see the bar decorated with a spy theme. You will feel like 007 or Jason Bourne in there.

Wrigleyville is a neighborhood on the north side of Chicago. The home of the Chicago Cubs, Wrigley Field, is located there. You can visit several bars in the area to chill and grab a drink. A few years ago, I went to a bar at The Hotel Zachary and lounged on their balcony right across the street from Wrigley Field for a minute.

Get tickets to Cubs, White Sox, Bulls, Bears, and Blackhawks games below!

Next up on the list of 48 hours in Chicago is to check out a cruise. You can sit back, relax, and appreciate Chicago’s cityscape as much as possible by being out on Lake Michigan and along the Chicago River. There’s a selection of speedboat rides and cruises. The Classic Lake Tour is a 40-minute sightseeing trip. It gives you plenty of time to soak up the sights and enjoy the moment. You can leave on a speedboat at the old Navy Training Center on Navy Pier for a 75-Minute Architecture Cruise, starting on the lake and then going upriver as far as the Willis Tower. The Chicago River Architecture Cruise has a slower pace. You also get a great view of more than 40 listed landmarks.

For 25 years, the 442-meter Willis Tower was the tallest building in the world and is still the 17th tallest, according to the latest ranking. With the Chicago Skydeck Experience Ticket, you can skip the line and, in no time, reach the Skydeck 412.4 meters above the west side of the Loop. You can experience the movie describing the 45-year history of the Willis Tower and Chicago’s other architectural wonders on the twisty route to the elevator. At the end of the fun ride, you’ll be mesmerized by a view extending over 50 miles and four states. You might also experience your stomach flutter or a buzzy feeling at the Ledge of the Skydeck. It is a glass box providing never-before-seen views of the city over a sheer drop of more than 100 stories. If you’re not afraid of heights, this is a must-see if you have 48 hours in Chicago.

This art museum is home to three of the most studied and recognized paintings of the last 150 years and amongst the best in the world. These works are Nighthawks, American Gothic, and A Sunday Afternoon on the Island of La Grande Jatte by Edward Hopper, Grant Wood, and Seurat. You can also witness Picasso’s Old Guitarist, it represents a great deal of sorrow and grief.

Outside of Paris, the Art Institute of Chicago has the largest collection of Impressionist and Post-Impressionist paintings. You can enjoy various works done by artists like Monet, Cézanne, Renoir, van Gogh, and Toulouse-Lautrec. Also, modern art from the likes of Jackson Pollock, Warhol, Jasper Johns, and Matisse, while the modern architecture and design collection have drawings and models by Frank Lloyd Wright, Le Corbusier, and more.

Popularly known as “Chicago’s front yard,” Grant Park fronts the Loop on Lake Michigan and is the city’s major open space. It is 319 acres of lush green space, a must-see for tourists and a staple attraction for Chicagoans alike. It contains lots of Chicago’s top attractions like the Maggie Daley Park, Museum Campus Chicago, the Art Institute of Chicago, Millennium Park,  and the epic Soldier Field, home of the Chicago Bears NFL team.

In July, Grant Park hosts the Taste of Chicago Festival, the world’s largest food festival, and in October, it is the start and finish line for the Chicago Marathon.

This award-winning space was built to represent the new millennium and is the most liked attraction in the Midwest.

Millennium Park is free to enter and has bold public art, mesmerizing architecture, and some futuristic initiatives. For instance, the 2.5-acre Lurie Garden is part of the world’s largest green roof, whereas the McDonald’s Cycle Center is a modern indoor bike station that offers rental, repair, and many more services for Chicago’s cyclists.

Remember to visit the Jay Pritzker Pavilion; it is Frank Gehry’s renowned outdoor music pavilion and is the showpiece of Chicago’s Millennium Park.

Lincoln Park Zoo is spread across 37 acres and was founded in 1868. It should be appreciated for being one of the few remaining free visit zoos in the United States. More than 1100 animals live here, and habitats are constantly being reconstructed. Its mission is to bring people closer to nature. It provides indoor and outdoor habitats for ostriches, gazelles, pygmy hippos, giraffes, and many more.

We’ve made it to the last item on the list of things to do if you have 48 hours in Chicago. Buckingham Fountain is located at the center of Grant Park. The Buckingham Fountain was opened to the public in 1927 and is one of the largest in the world, at almost 8 meters tall. The fountain is sculpted out of Georgia pink marble and contains 5,700,000 liters of water. If you’re there during the day, don’t miss the hourly, 20-minute water show featuring the fountain’s center jet shooting water 150 feet into the air.

Below are some resources that I used.

Uber/Lyft – I used Uber and Lyft to get around Chicago. I spent less than I would have if I had rented a car and had to worry about parking and gas. Get $5 off your first ride for Uber & Lyft when you click on the links.

Rakuten – I booked the hotel on Hotwire. Before I did that, I signed in to my Rakuten account and completed the transaction. I got $12 cash back deposited in my account for booking it that way. If you don’t have Rakuten, sign up for it today. Use my link here and get $10.

Have you ever been to Chicago? What things must you see if you have 48 hours in Chicago? 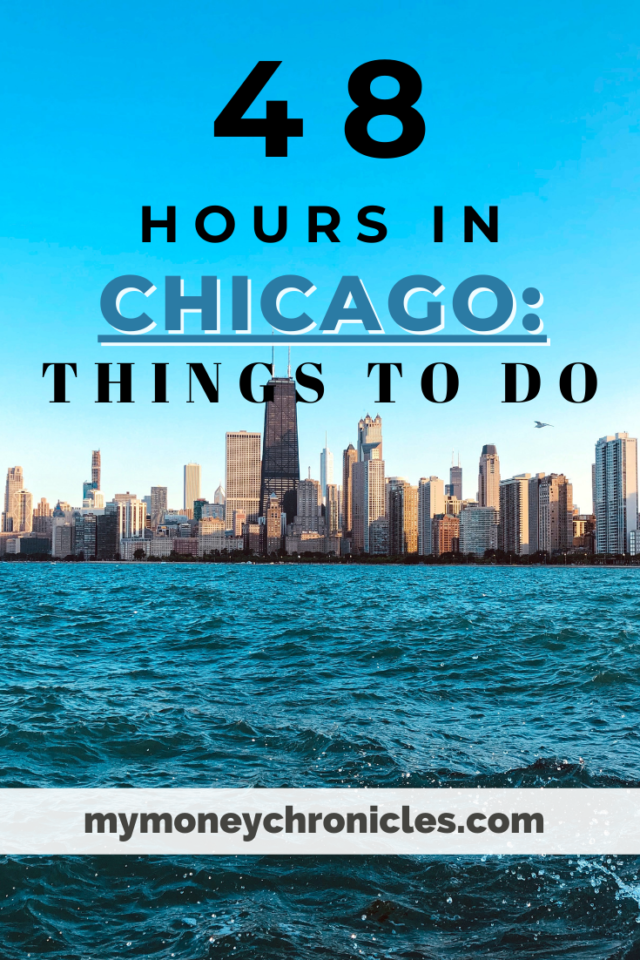