Traveling is one of my favorite things to do. I enjoy it so much. Over the years I’ve written numerous travel posts including my cross country trip recap and my things to do in Toronto post. Today’s post is travel related as well. In April, I had the chance to knock off something else that was on my bucket list. For years, I wanted to travel to Europe. I began to think about a Europe vacation as early as 2014. Five years after my initial thoughts about it, it came to fruition. In April, I was able to travel to London, Paris, and Belgium. The experience was better than I could have imagined. Today, I want to go over some unique things to do in London.

Big Ben is the world-famous clock tower. It’s located at the Palace of Westminster. The official name of the tower is the Elizabeth Tower. It’s one of London’s most popular landmarks. It’s currently undergoing reservations, but it’s still a must-see.

While discussing landmarks, the next location on the list of unique things to do in London is the Tower Bridge. It is one of London’s most famous bridges. If you search for London anywhere online, you’re guaranteed to see pictures of this bridge somewhere on the website. The bridge is so popular that many people get it mixed up and call it the London Bridge, but it’s not. The London Bridge is smaller and further down the river. I made sure to check out both bridges.

Brixton was one of my favorite parts of London. It’s an area that’s located in South London. There was a market out there as well as a lot of shops. Brixton is also known for having different murals in the area. I didn’t get a chance to see all of them, but I did see one of David Bowie, and another of Michelle Obama. There was also a larger mural that featured Big Pun, 2pac, Biggie, Big L, and ODB.

Next on the list of unique things to do in London is the Hippodrome. The Hippodrome is probably the most famous casino in London. The casino has been in operation since 2012, but the building itself has been open since 1900. The Hippodrome has three floors of gaming as well as a theater and multiple bars. It’s located near Chinatown. Speaking of Chinatown, that’s the next one on the list.

If you’ve read anything about London, you’ve probably seen a picture of the big Ferris wheel. The London Eye, as it is called is the most popular paid tourist attraction in London. I’m a little shocked. I figured that something else would be a little more popular. I don’t like heights, so there was no way in hell that I was going up there. My girlfriend told me that the views were great, but I’m good. If you have no problem with heights, by all means, check it out.

If you’ve followed me for a while, you know that I love sports. I like to check out different sporting events when I’m traveling if it’s possible. I had to at least check out Wembley Stadium. Wembley is home to England’s National Soccer team. The NFL also plays most of their London games there.

The Blues Kitchen is a BBQ restaurant and live music venue. I went there one night and was shocked to see how lively it was. There was a band jamming on stage. The place has a retro feel to it. The Blues Kitchen has three locations. One is near Camden, while the others are in Brixton and Shoreditch. It is definitely one of the unique things to do in London.

Piccadilly Circus reminded me of Times Square a little bit. It was hustling and bustling and I loved it. Piccadilly Square is a good spot to take pictures at. Restaurants, bars, and tourist attractions are all over the area.

You can’t come to London and not get a picture near the River Thames. Many of the best things to do in London are located near the river, so you can’t help but see it. You can take a boat to do some sightseeing in the attractions in the area.

Trafalgar Square is a public square that’s located in Central London. The square is surrounded by historic buildings, museums, and more. If you’re a fan of nice architecture, then you have to visit this place. During Christmas time, the Trafalgar Square Christmas tree is put up. It’s a huge attraction during that time of the year. Victory parades for the local sports teams are also held in the square.

As you can see, there is a lot to do in London. I wasn’t even able to see everything. I didn’t get a chance to see Hyde Park, Madame Tussauds, or Abbey Road. I’ll have to do those things on my next trip to London.

What’s on your list of unique things to do in London?

There are hundreds of Airbnb’s across London. Many are cheaper than the hotels. Get $40 off your booking when you sign up for Airbnb through this exclusive link. 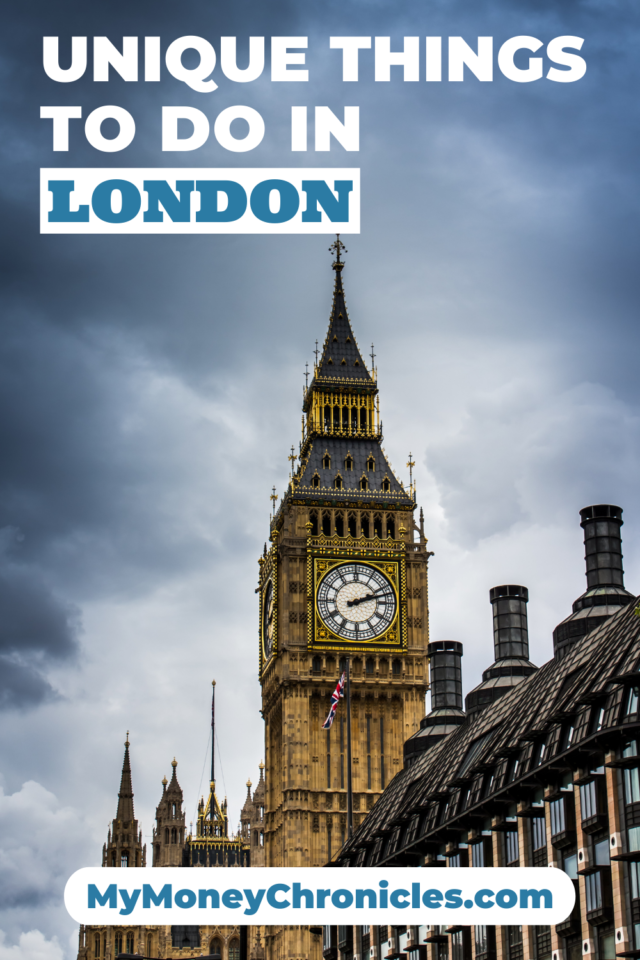