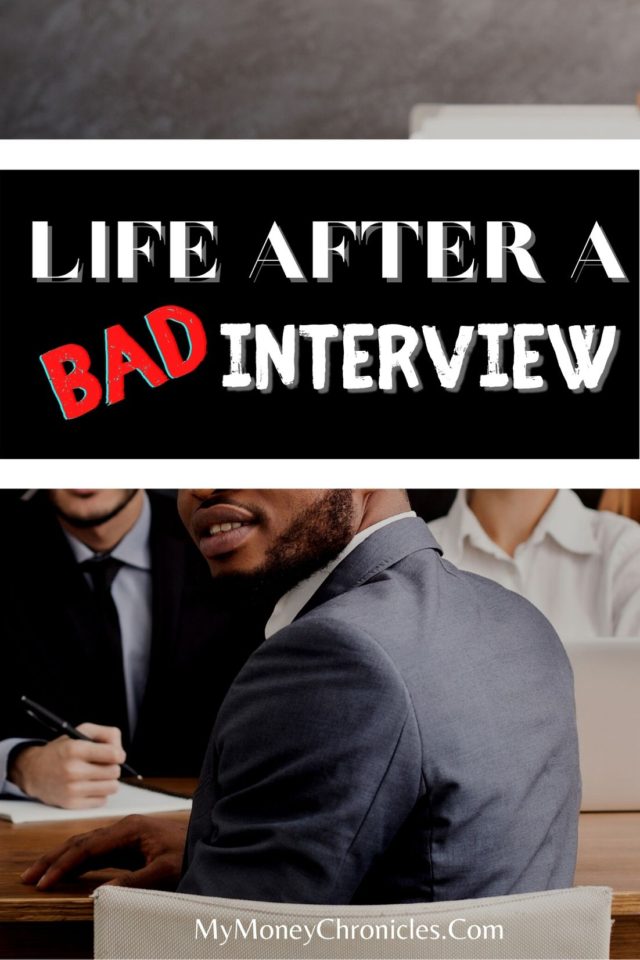 I went back and forth debating with myself if I should do this post or not. I decided that I should share it. This will be one of my realest posts to date. I’ve shared this story with a couple of people before in the past. Today, I want to share it with y’all so that you don’t make the same mistake that I did on this bad interview a few years ago. To date, it was my worst job interview.

I moved back to Atlanta in late February 2011. I had outgrown Savannah and was ready for a change. At the time I was working for a bank, so I was able to transfer to a branch in Atlanta. Once I returned to the ATL I felt things out for a month then I started applying for other jobs. Some jobs were still in the banking industry, but most weren’t. About three months after I returned home I had a chance to be interviewed for a higher paying job at another bank. I was tired of working at banks, but I needed more money, so I gladly accepted the interview and started to prepare for it.

A couple of weeks before the interview I found out that my fraternity was having a conference during the same week that my interview was scheduled for. The welcome party for the conference was Thursday night. My interview was scheduled for Friday at 10 AM. I figured that it would be fine to go to the party for a couple of hours and have no more than three drinks. I would then leave early enough so that I could still get a good rest. That’s exactly what I did.

The Morning of the Bad Interview

The next morning I woke up feeling refreshed. I showered, got dressed, and headed to the interview. Once I got to the interview the 1st thing that I noticed was how hot the room was. It was June, but for some reason, they didn’t have the AC on. Even though I was in a suit, I didn’t let that get to me. The interviewer came in and started asking me the typical interview questions. I answered them to the best of my capabilities. Probably ten minutes into the conversation I began sweating because it seemed to be getting hotter in the room. As I finished the interview, I thanked the interviewer for their time and left.

The 1st thing that came to me was that the interviewer probably thought I was a damn wino or something. I also realized that the interviewer smelled the alcohol because I was sweating. The alcohol was seeping out of my pores. I can’t believe I had made such a terrible mistake. At that moment, I made a promise to myself to never drink the night before a job interview again. I was embarrassed, and I never wanted to make that type of mistake again.

I learned a hell of a lesson that day. That was my worst job interview ever. I haven’t had a drink the night before an interview since then. If that had been my dream job that I was interviewing for, I would have been screwed big time. Thankfully, I’ve matured and realized that some things could wait (drinks) until later.

I learned a good lesson that day. Since then, I haven’t had anything like that remotely happen in my interviews. I’ve been focused and had some great talks with potential employers. Here are 5 things you should consider before your next interview.

Focus on the Basics

Be a Student and Show Interest

If you are interested in the position, be sure to show this. Another big comment I hear from employers and managers is that they want to hire someone who is eager to learn. Before the interview, write down any questions you would like to know about the company. This includes organization, culture, and position details. During the interview, it is not only important that they learn about you, but that you should learn as much as you can about the organization. Depending on the situation, show them as honest and humble as possible. If you do not know the answer to a question, let them know, and let them know if you would like to know more about this topic.

Ask for Time to Think

Denzel Washington spoke to his interviewer about the long-term consequences of having too much detail from the media, in which he expressed concern about the need to be first rather than contradicting the need to be real. One of the things I learned that helped me to be as honest as possible in the interview was asking for time to think. If you are facing a challenging question, ask the inquirer if you have time to think about the question. I strongly believe that the person asking the questions does not see how quickly you can answer the question but the quality of the answer – and quality takes time.

Whether you get a job or not, always show appreciation for the interviewer and the organization. A simple email expressing your gratitude for this opportunity goes a long way. Be sure to do this as soon as possible after the interview.

Have you ever made a mistake at a job interview? What was your worst one?