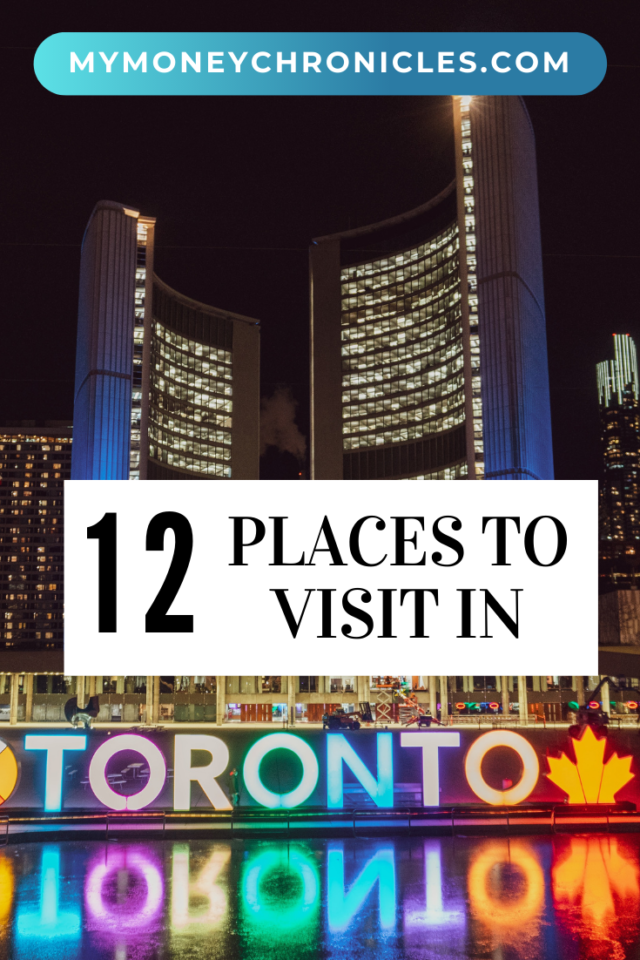 Can you believe that it’s already September? The weather will be changing and the days will be getting shorter. I’m not looking forward to either of those happening. I love summertime. I’ll spend this time enjoying the last few weeks of it. Summer 2018 has been very good. I had a chance to do some traveling in June, July, and August. In July, I visited Toronto and NYC. Today, I want to go over twelve places to visit in Toronto.

The CN Tower is Toronto’s most popular landmark. It is the third tallest building in the world. There’s an observation deck at the top. It offers great views of the city. I’m not a fan of heights, so my girlfriend went up there by herself. They have a cafeteria and waiting area for anyone that doesn’t want to go up. I relaxed there for an hour while she did her thing.

How could I come to Toronto and not get a picture of the 3D Toronto sign? It is located in Nathan Phillips Square. The sign was bigger than I thought it would be. We took pictures of it during the day. If you have to chance, go check it out at night. The sign illuminates. That makes for some great pictures. This is a must for places to visit in Toronto.

If you’ve been reading my blog for a minute, you know that I’m a huge baseball fan. I have a goal to visit every Major League Baseball stadium. The Toronto Blue Jays play at the Rogers Centre. I had the opportunity to take some pictures of that stadium and visit the team store. I didn’t get to go to a game though. The Blue Jays were not in town the days that we were there. That means that I’ll have to make another trip to Toronto in the near future to scratch this stadium off my list.

This public square is located at the corner of Yonge Street and Dundas Street. The intersection is super busy. People were everywhere. There are fountains in the square that run from April until October. People were playing in them. There was also a lot of shopping in the area as well. Yonge-Dundas Square reminded me of Times Square. It had that vibe to it. It’s a must-visit if you’re in Toronto.

Next on the list of places to visit in Toronto is St. Lawrence Market. It is one of the best food markets in Toronto. The market has over 120 vendors. You can find all types of food there. Next time I visit, I’ll have to spend more time there and try some of Toronto’s famous poutine.

If you are an NBA or NHL fan, you have to check out Scotiabank Arena. It is home to the Toronto Raptors and Toronto Maple Leafs. Even though it’s not basketball or hockey season, I was able to go inside the arena and check out the team store.

One of the best museums in North America, The Royal Ontario Museum (ROM), is the perfect place to experience history in Toronto. There is also a subway stop called Museum, which makes it easier to find. With over 6 million artifacts in its collection, the ROM has 40 separate galleries to display these works. There are some galleries that are dedicated to natural history and others are from around the world. The museum has a rich collection of arts and artifacts, as well as dinosaur bones, minerals, arts, and design items, especially from the Art Deco era. There is also a learning zone for kids and a shop.

You wouldn’t find a better place than Kensington Market to enjoy a true glimpse of Toronto’s multiculturalism. It used to be a Jewish market, however, this National Historic Site today has turned into a vibrant neighborhood for artists, writers, and foodies. Kensington Market is a major tourist destination full of fresh food stores, used clothing stores, extra discount stores, and great cafes. It is also home to a few landmarks, such as the Bellevue Square Park and No. 8 Fire Station.

The neighborhood is also popular for its diverse artistic community, with small galleries, tattoo studios, and rare bookstores. There are no branded stores here, instead, everything is locally run and owned. This is definitely one of the more unique places to visit in Toronto.

Take a moment to go back in time and explore the hallways and rooms of the beautiful Casa Loma. This is a Gothic Revival-style castle and one of the most unique pieces of architecture in midtown of Toronto. It has now been transformed into a museum with towers, gardens, decorated suites, stables, and secret passages. The visitors can take advantage of self-guided audio tours which are available in 8 different languages. Casa Loma has appeared in several films, including X-Men, The Pacifier, and Chicago. It is also popular for hosting weddings and private events.

You can see a few small islands that are part of the Toronto city on Lake Ontario and hence they are known as the Toronto Islands. There are 13 total islands spread over 820 hectares. The most popular island is Centre Island as it has a huge park with picnic areas, a beach, elegant gardens, and an amusement park. It’s best to visit in the summer.
Some islands are home to some of Toronto’s oldest residential communities, while others are housed in prestigious yacht clubs. The Toronto Islands even have its own airport.

The Toronto Zoo is world-class, it is considered to be one of the best zoos in North America. It has both indoor and outdoor displays and is divided into several different zones.
Most people can’t explore the entire zoo on a single visit, as it’s huge and has so much to see. Over 5,000 animals live here in their natural habitat. One of the most popular areas of the Toronto Zoo is Africa, which includes white rhinos, Masai giraffes, white African lions, and spotted hyenas, and many others. The Australasian Pavilion is popular because it houses lionfish, Western grey kangaroos, kookaburras, komodo dragons, and wallabies.

Ripley Entertainment owns Toronto’s one of the three aquariums. Ripley’s Downtown Canada Aquarium displays about 13,500 exotic marine life in its 5.7 million gallons of water. The aquarium is home to marine and freshwater life from around the world, including giant Pacific octopus, green sea turtles, white-spotted bamboo sharks, southern stingray, and upside-down jellyfish. Ripley’s Aquarium of Canada is divided into nine galleries, all with specific geography or species. Rainbow Reef is probably one of the most popular for its interactive dive shows.

Niagara Falls is not in Toronto, but it’s only an hour and a half drive. You have to make that trip. It will be worth it. Seeing Niagara Falls in person was one of the best experiences of my life. It was so relaxing. We stayed on the Canadian side. That’s where the action was at.

Besides the falls, there were bars, restaurants, shopping, casinos, and more. I didn’t know there was all that going on in Niagara Falls. If you are going to Toronto, you should make a quick road trip to Niagara Falls.

Toronto was great. It’s a city that I’ll be visiting again. If you plan to visit Toronto, don’t forget your passport and read up on the conversion rates. You don’t want to be blindsided when you purchase something.

Have you ever been to Toronto or Niagara Falls? What are some other places to visit in Toronto?

This is my go-to website when I’m looking for information about a new city that I’m interested in visiting.

If  I can’t find a hotel deal when I’m traveling, I use Airbnb. I’ve used it in places like Miami and Havana, Cuba. Both homes that I stayed in were nice. Use this coupon the first time you book a stay with Airbnb, and you can save $40.

I’ve used Rakuten to get cash back for a couple of hotels that I’ve booked. If it worked for me, there’s a good chance that Rakuten will work for you as well.  Sign up for Rakuten through my link and get a free $10 cash back! 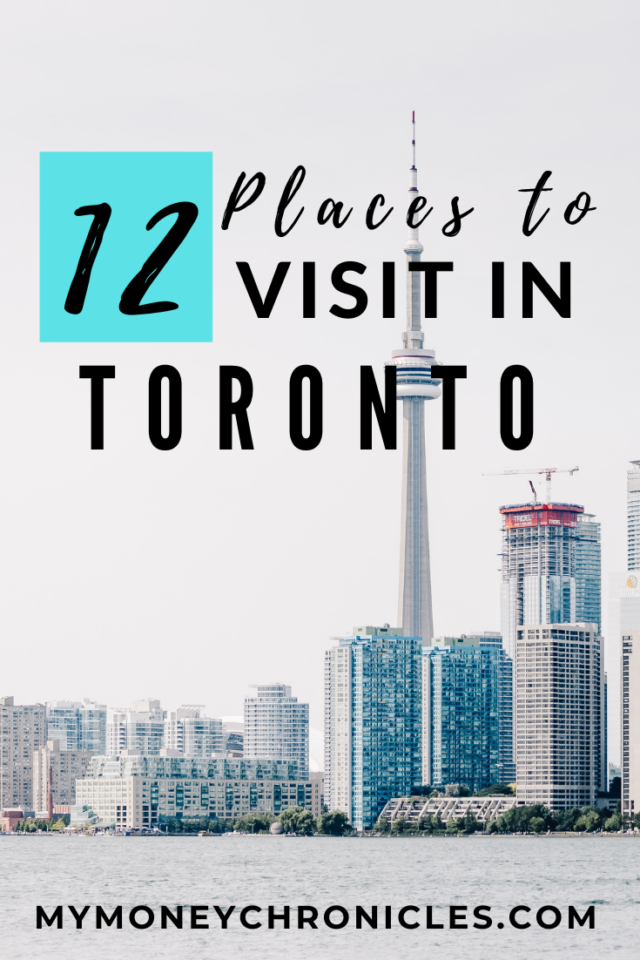