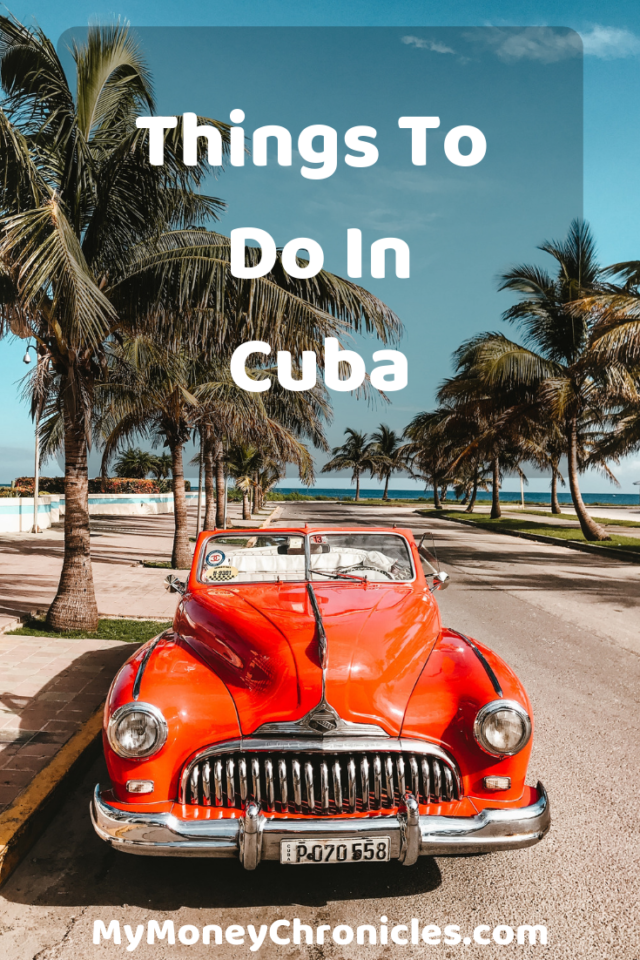 In December, I had the chance to use my passport for the second time in four months. In August, I went to Costa Rica. This time I went to Havana, Cuba. With the United States and Cuba easing travel regulations, I knew this was the time to visit. I wanted to see Cuba while it still has its original Cuban flavor. Who knows what will happen in a few years? It could become Miami south.

The first thing that I want to tell you is that Americans cannot freely go to Cuba yet. Your trip has to fall in one of these 12 categories:

If your trip doesn’t fall under one of these, you won’t be allowed in the country.

I flew with Southwest Airlines. Once you book your flight, they will send you information on how to obtain your visa. That’s right; you need a visa to get into Cuba. With Southwest, the Visa will cost you $50. I’m not sure how much, the other airlines charge for it. You may be able to get it cheaper if you take the time to look for it. My trip was a little less than a month away at the time the tickets were booked, so getting a visa through Southwest was the best option for me.

My flight itinerary to Havana was pretty simple. We flew from ATL to FLL and then from FLL to Havana.  When we got to Fort Lauderdale, we had to go to the first floor of Terminal 1 to get our Visas. This process was very easy. From there, we took our bags to the special check-in area for Cuba. The flight from Fort Lauderdale was about an hour.

This was only my second time flying out of the country. Jose Marti International Airport was much different than my home airport (Hartsfield-Jackson). Once we landed, the workers brought the air stairs to the tarmac, and we deplaned soon after. The airport wasn’t busy at all for it being late afternoon on a Sunday.  Getting our bags was easy, but converting currency took two hours. There was only one window open. She took her damn time and also allowed airport workers to cut the line several times. That pissed me off just a little bit.

The American dollar is charged a 10% penalty and 3% exchange rate at the airport. After those charges and a small fee, $400 became $345.20. Fifty-five bucks were gone. The good thing was that I was prepared for that to happen. Cuba has two currencies. The first one is the CUC. That’s the currency that all the foreigners will be given. The CUP is the money that the locals use. It’s worth a lot less than the CUC; so much so that they don’t even give it to foreigners. When you’re getting change back from stores or restaurants, pay close attention and make sure that you are getting CUC’s back.

During my time in Cuba, we stayed at someone’s apartment (Casa particular). It was located in Central Havana near Vedado. The room was booked through Airbnb. The apartment was nice. It was clean, had enough space and it also had air conditioning. I went the Airbnb route because hotel prices were a little high in December. Booking that apartment through Airbnb was a fraction of the price. My trip was from Dec 18th – Dec 22nd. The price of the apartment was $77 total. I had a $35 discount because it was my first time using Airbnb. That’s the way to go. If you’ve never used Airbnb before, I’d suggest you try it. You can get $35 off your first stay by signing up for Airbnb with my link here.

Taxis are the way to get around. A taxi from the airport to Central Havana should not cost you more than $30 CUC. Most of our taxi rides around the city were under $10 CUC. The owner of the apartment that we stayed in referred us to a cab driver that she does business with. He took us to and from the airport and to a few other locations.

A lot of the old school cars that you see on TV and online are used as taxis. The cars were nice to see. When you see them every day, you will feel like you’ve been transported back in time.

Below are a few things to do in Cuba. There is a lot to do.

Calle 23 was one of the popular streets in Vedado. There were restaurants, shops, and people everywhere. The Habana Libre hotel is located at one of the corners of Calle 23. That hotel has Wi-Fi that people can use. It costs five dollars an hour, though. I spent $15 on internet during the trip.

I could see the Malecon outside of the apartment that I stayed in. The Malecon is a large seawall where a lot of the locals go to relax and chill. We were so busy that we didn’t even get a chance to walk over to it.

Taking a tour in one of the old school cars is a must! The tour that we did cost $40 per person. It was worth the price. Our tour guide spoke English. He took us through five of the districts of Havana which are Central Havana, Old Havana, Vedado, Nuevo Vedado, and Miramar. We also saw a lot of attractions such as the Capital, The Havana Club, China Town, and Revolution Square. Revolution Square was huge. That was where Fidel Castro did a lot of his speeches. We also were able to get some Cuban cigars outside one of the cigar factories.

Obispo Street was one of my favorite spots. It was located in Old Havana. If you love the hustle and bustle of the major cities, then Obispo is for you. The street is filled with shops for you to get souvenirs. There are also bars and restaurants on the street. You also may see street performers.

We stopped and grabbed a drink at the Restaurante Floridita. The restaurant was one of Ernest Hemingway’s favorite hangout spots. They had live music playing while we were there. The band was getting down.

Sloppy Joe’s Bar is a historic bar located in Old Havana. The atmosphere was great, and the drinks were good. The bar has a very nostalgic feel to it. There were pictures of celebs and athletes from the early to mid-1900’s plastered all over the walls.

The Hotel Nacional de Cuba is a luxury hotel located in Vedado. The hotel is very important to Cuban history. During the Cuban Missile Crisis, Fidel Castro, and Che Guevara set up their headquarters there. Famous people such as Mickey Mantle and Marlon Brando have stayed there. On the day that we visited, there was a band playing live music in the courtyard. It was incredible drinking a beer and listening to live Cuban music.

Playas de Este is the beach. It’s about 25-30 minutes from Central Havana. It’s a hidden gem. Playas de Este was one of the best beaches that I’ve been to in my life. It was beautiful and relaxing. Honestly, I wish I could have spent more time there.

We went there and saw a Cuban show. I really wasn’t interested in going at first, but I am glad I went. This was another highlight of my trip. The Cuban show was great. They performed a lot of songs, and they had great dance routines.

I love trying local cuisine in other cities/countries. I was a little underwhelmed with the Cuban food. A lot of it was very bland. Maybe we didn’t go to the right places. I will say that there were two restaurants that I enjoyed eating at.

Cuba was a great place to visit. I had a great time experiencing Havana and its culture. There things that I didn’t get to do such as go to a baseball game or take pictures on the Malecon. I’ll probably visit Cuba again in a year or two. There are still some other things to do in Cuba that I missed.

Make sure you check out Friday’s article. It’s a Q&A post regarding Cuba. If you’re planning on going to Cuba, it will help you out a lot.

Have you been to Cuba? What are some other things to do in Cuba?