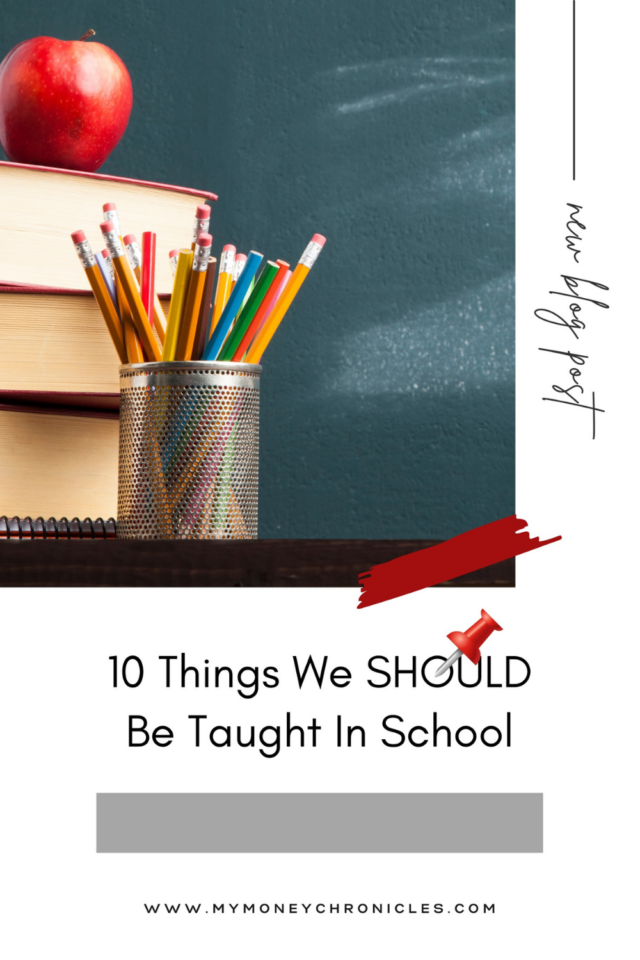 Growing up there was a lot of things that we were taught in school that most people don’t even use anymore. Some examples are drafting, calculus, and trigonometry. I think that those things should be replaced with stuff that people actually use on a weekly basis. I have compiled a list of 10 things that people should be taught in school. People usually learn about these things, but by the time they do, it is often too late. These things will help people a lot. For some, it could even keep them outta debt.

How to Balance Your Books

When I first started working at Wells Fargo back in 2009, I was amazed at how many people didn’t balance their checking or savings account. A lot of people had no idea how much money they had in their accounts. People would continue to use their debit cards and just spend like they had a money tree. I used to have so many customers come in with overdraft fees. It was ridiculous. If we were taught in school how to balance our accounts, overdrafts would go down. People would also know what’s in their accounts and hopefully save more money.

The only thing I can remember learning about loans was that you had to pay them back. I was never taught about the different types of loans or interest. Unfortunately, I was not the only one. I have heard constant stories about people taking out loans and now wondering how they owe so much. Hell, this happened to me. Learning this information in school could help a lot of people out.

I’ve been working in financial aid for four years. Believe it or not, some of the students that I’ve talked with didn’t even know that the loans had to be paid back. It’s sad. I share my student loan debt experience with them. Hopefully, it will persuade some students not to get into loan debt. Some students listen, while others don’t.

If you do have a lot of student loans, you may want to see if you can get them refinanced. Doing that can save you a lot of money. I refinanced my loans a few years ago and got a lower interest rate and a lower payment. Check out the company Earnest for more info.

This should have been the first thing on my list. A lot of people don’t understand taxes. I know I don’t. I’ve had problems with the IRS. I currently still owe them some money. Our tax laws are very detailed. There are so many loopholes and tax advantages out there. Most people don’t know them because of a lack of understanding. There should be some kind of tax curriculum available for kids starting in middle school.

Credit Cards are a source of debt for a lot of people. Most folks don’t pay them off each month so they have to pay interest. Interest adds up. A couple of years ago, I had a credit card where I owed about $3400. The interest on it for one month was $76 bucks.  $76 was too much money to be spending on interest. In a year that would add up to be $912 worth of interest. That’s ridiculous. That money could go towards investments or savings, but it’s not. If we learned about credit cards in school I’m sure that a lot of people wouldn’t even use them. If they did use, they’d probably pay them off in the same month.

Buy Stuff You Can Afford

If they taught this in school, I’m not sure how many people would actually listen, but I put this one on the list anyway. This is common sense, but a lot of people would be in less debt if they only bought stuff they could afford.  Trying to keep up with the Joneses is keeping quite a few people in debt. If you only purchased things that you could afford, your finances would definitely be better.

Here is another critical thing students don’t usually learn in schools. I’ve met several people at interviews, and their lack of proper interview manners and etiquette was very evident. The end product of attending a school is landing a job, making me wonder what schools are teaching. Of course, some people will naturally be better than others at interviews, but a few lessons with some practicals will make any student prepared for any interview. However, that is lacking in the educational sector today. Schools should teach students how to identify their weaknesses so that they can address them before interviews. An approach I suggest to help to achieve that is offering mock interviews.

Although no one wants to be in a condition that requires these skills, they are still necessary for some unforeseen situations. Of course, you can solve calculus and quadratic equations, but how will that help you even stranded in an unknown location? So, schools should teach students how to fend for themselves and withstand any life or death situation that comes their way.

Mental health issues are a big one today. Ranging from ADHD to anxiety and depression, one in five people struggles with a mental health challenge. In the United States today, mental health is a hundred billion dollar industry because schools are not teaching us how to take care of ourselves. Even with the rise in living standards, we can see several successful individuals burning out or depressed to a point whereby they just want to stop living. The surge in anti-anxiety medications is also a significant pointer to how prevalent the issue is. Hence, educational institutions should take up the responsibility of implementing mental health-related topics in the curriculum.

The majority of us will spend a significant part of our lives in a romantic relationship with someone. So, why are schools not teaching it? Many millennials grew up with Tinder or other dating apps. Those aren’t the best teachers. Thanks to personal development, some people develop emotional intelligence to prospect a possible partner, while some may not achieve that. The bottom line is that relationships and dating are vital aspects of living, and it should be taught in schools. Teaching this topic might be tricky on a large scale; therefore, educational institutions must update the curriculum alongside technology.

How To Make More Friends And Become More Sociable

Here is another aspect that everyone has left to chance, just throw the kids in a room, and they will figure it out. Although it works when younger, what is now the next line of action as they grow older. I still have some childhood friends who find it challenging to make new friends after school. And remember, your network is your net worth. Making friends is one of the major requirements for success; your ability to network and connect with other people will play a significant role in your success. That triggers the question that “why are schools not teaching that?”

These are 10 things that I think should be taught in school. I believe that people would be better individuals if this happened.

What are some other things that should be taught in school?