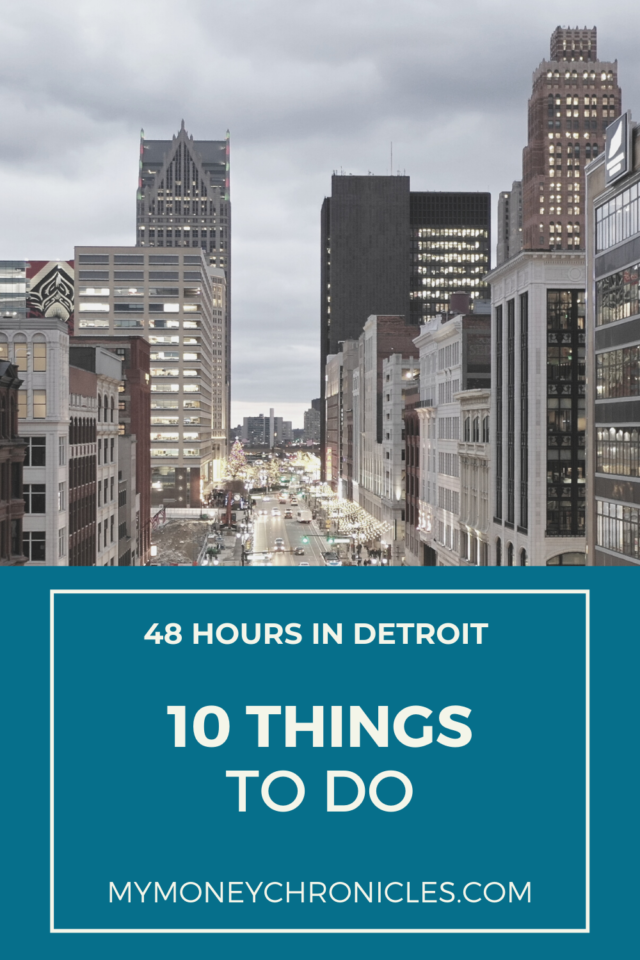 Detroit is the largest city in Michigan. It is known as the Motor City because it has been the center of the American auto industry for over a century. In the last few years, Detroit has been under major revitalized. It is a great city to visit. Today, I want to share ten things to do in Detroit. If you have 48 hours in Detroit, it’s a must that you check out these places.

10 Things to Do in Detroit

The Temptations, The Jackson 5, Stevie Wonder, and more all got their start with the Motown record label. I’ve been a fan of the Motown sound since I was a kid. Several people in my family had records and tapes of Motown artists. The Motown Museum is a must-visit if you’re in Detroit. It was one of the best experiences of my life.  I had the chance to see where some of the greatest artists of all recorded and did business at. What was great about the museum was that some of the rooms hadn’t been changed since the 70’s. Barry Gordy’s apartment still looked like it did over 40 years ago.  The calendar in one of the offices was still on the March 1973 date! It’s amazing how they kept things preserved in the museum. Whether you have 48 hours in Detroit or more, you must visit the Motown Museum.

If you are a baseball fan, you can’t come to Detroit without seeing the Tigers play at Comerica Park. Whenever I go to a new city in the spring or summer, I try to get a baseball game in. Comerica Park was done right. It’s a newer park, but it has that retro feeling. I’ve been to 16 ballparks, and this one is in my top 5. If you like football, the home of the Detroit Lions (Ford Field) is across the street.

You must check out the MGM Detroit Grand if you like to gamble. I heard that Detroit has a few casinos, but I didn’t know that the MGM would be one of them. This casino had me feeling like I was in Las Vegas. The MGM Grand had a lot of machines to play with and a couple of bars & restaurants to choose from. It’s one of several casinos in the Detroit area.

The next thing to do in Detroit is to check out Eastern Market. It is an open-air market that has over 150 food and business vendors. My cousin took my girlfriend and me out there on a Saturday morning. It was a good crowd out there. People were all over the place. People were selling all types of things out there. We visited a few vendors and checked out the Detroit versus Everybody store, and even found a place that let us sample some Detroit gin and whiskey.

The Greektown area is next on the list. It’s an entertainment district that is located in downtown Detroit. Greektown has several bars and restaurants to choose from, including Pizza Papalis and Fishbones (where we ate). The Greektown Casino Hotel is also located in the district.

The Riverfront is good for getting a quick run or walk. You can take some beautiful pictures of the view as well. This area is good for all ages. It’s one of the best free things to do in Detroit. Directly across the river is Canada. Something else that I liked about the Riverfront was that the Gateway to Freedom International Underground Railroad Memorial is located there. The memorial pays tributes to African Americans who fought for freedom when everyone didn’t have it.

Next up on the list is the Charles H. Wright Museum of African American History. The museum was founded in 1965. It has over 35,000 artifacts in it. It holds the world’s largest exhibit on African American culture. It’s a must-see if you want to learn more about black history.

This spot was near our hotel, so we decided to eat there, twice. Green Dot Stables is a restaurant that specializes in sliders. The sliders cost $3. They had several kinds to choose from. My favorites were the Fried Chicken Caesar Slider and the Coney Dog Slider. They also had fries, soups, salads, desserts, and drinks. If you are looking for good food for a great price, you should check out Green Dot Stables.

We passed this spot in the Uber a couple of times and decided to check it out the last night that we were in Detroit. It was a great decision. This was my first time going to a ramen spot. I can’t remember what I ordered, but it was good and spicy. For more info about Johnny Noodle King, visit their website here.

Canada is literally across the river from Detroit. I couldn’t go to Detroit and not visit Canada for a few hours. There are two ways to get to Canada from Detroit. You can go via the underground tunnel, or you could take the bridge. We took the tunnel going and took the bridge on the way back. Windsor is the city that you will arrive at once you cross the border. Windsor was a lot quieter than Detroit was. The only thing that we did was go to the Caesars Windsor Casino. The casino was a lot more chill than Greektown and MGM Grand. I played a couple of slot machines and won $70! I’ll call that a successful trip. If you have some spare time while in Detroit, Windsor may be a good place to visit for a couple of hours.

Have you ever been to Detroit? What are some of your favorite things to do in Detroit?

To learn more about Detroit, you can check out TripAdvisor. You can find reviews and lists of other things to do.

Expedia is a travel company that allows you to review and book trips on its website. You can get info on hotels, cars, destinations, and more