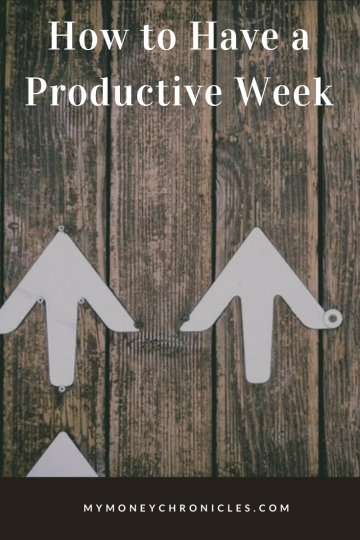 For years, I had attempted to do things such as start a blog or read more books. I wanted my weeks to be more productive. For some reason, it didn’t click for me until my late twenties that for me to accomplish new things I would have to change some of my bad habits. You may be asking yourself how to have a productive week. If so, you are in the right place. Today, I want to share with you some things that I did that allowed me to be more productive. Hopefully, they will help you out as well. I am still a work in progress, but I am doing much better than I was seven or eight years ago.

How To Have A Productive Week

If you are asking yourself how to have a productive week, you have to watch less television. It was one of the first things that I did when I realized that I needed to be more productive.  When I returned from my cross-country trip a few years ago, I had a lot of time on my hands since I wasn’t working full-time. In the 1st couple of weeks, I watched a lot of TV. I’d get up between 8-9 am and then watch TV until it was time to go to the PT job that started at 4 pm. Once the 4-hour shift was over it was back to watching TV until 1 AM (The time I went to bed).  I realized that wasn’t working because I wasn’t getting much done.  The Butler Journal (which was the previous name of the site) was around, but I wasn’t as focused as I should have been. I decided to stop watching as much TV as I used to. I used those mornings to read, apply for jobs, and write. Well, something good happened. My focus started getting better, and my site began to get an identity. Fast forward to 2021, I typically watch TV after 5 pm on weekdays and 2 pm on weekends if I’m home or if it’s not football season.

If you find yourself in a similar situation, turn the television off. I promise that when you do that things will start to get better for you.

I use my weekends to do the majority of my writing and thrifting. This helps me to relax a little bit during the weekdays. A few years ago, every Friday & Saturday would consist of drinking and partying. Sunday would be the recovery day. Those days are over. I stopped drinking and partying every weekend a few years ago. Now, I usually work on posts every weekend. I also visit thrift stores almost every Saturday. I wake up fresh and ready to make things happen. In the past, that wouldn’t have been possible due to excessive partying.

There is nothing wrong with partying, but you have to have balance. There is no way that you can become more productive if you’re partying all the time.

The next thing on the how to be more productive list is very important. I used to come home from work every day and be lazy. I sit around and just bs for a couple of hours. Now, I try to do something blog or business-related for at least one hour on most days. It could be writing or editing blog posts or looking for more products to flip. The older I get, the more that I realize that time is my biggest asset. I wasted enough of it bullsh*tting around in my twenties. I refuse to do the same in my thirties.

I know that you may not want to be productive after work all the time, but if you can do something at least 2-3 times a week, you’ll make some progress on whatever you’re working on.

Everyone thinks they have a good memory until they forget something that they need to do. Making a to-do list will help you out a lot in the long run. Having this list is crucial if you are asking how to have a productive week. I create to-do lists several times each month. Those lists consist of personal and business things that I want to complete during the week. Without a to-do list, I’d be struggling out there.

If you’re not used to making a to-do list, check out this to-do list notepad that will help you get started.

Use my lunch break

I rarely go out for lunch because I bring my own food. It saves me a lot of money. While in the office I use my lunch break to approve comments on my site, read other blogs, and ship off packages to my eBay customers. I have about 30-40 minutes to do those things. It helps out so much. It could do the same for you.

If you have an hour lunch, think about what you can do to be more productive. Write some things done and work on something every day. You will start to see that you will have fewer things to work on in the evening.

Ignoring your cell phone will help you focus a lot better. At one time I answered every call and text message immediately, even if I was in the middle of working on something. I don’t do that anymore more. I usually reply once I’m finished. Phone calls and text messages can throw your focus off. As a business owner or side hustler, you can’t afford to let that happen. It’s not going to be easy at first, but you’ll get used to not answering your phone all the time.

There are also apps out there that can block social media for specific times. If you check your social media many times during the day, this can help you a lot.

I used to go out every weekend a few years ago. I enjoyed the nightlife. I always have and I’ll probably always will. ATL is a beautiful city at night. To get my finances and my mind right, I knew I had to cut back on going out. To be honest, it was one of the best things that I’ve ever done. I started to save more money and drink less because of it. My eating habits also got better because I stopped getting those late-night greasy meals from Waffle House. I go out maybe once a month because I still have to live a little while I’m paying off this debt.

When you go out less, you save more money and will be able to get more things done.

Some of those things were easier to do than others. With discipline, anyone can do them and you will be on track to having a more productive week in no time.

What is one thing that you will take away from this list of how to be more productive?