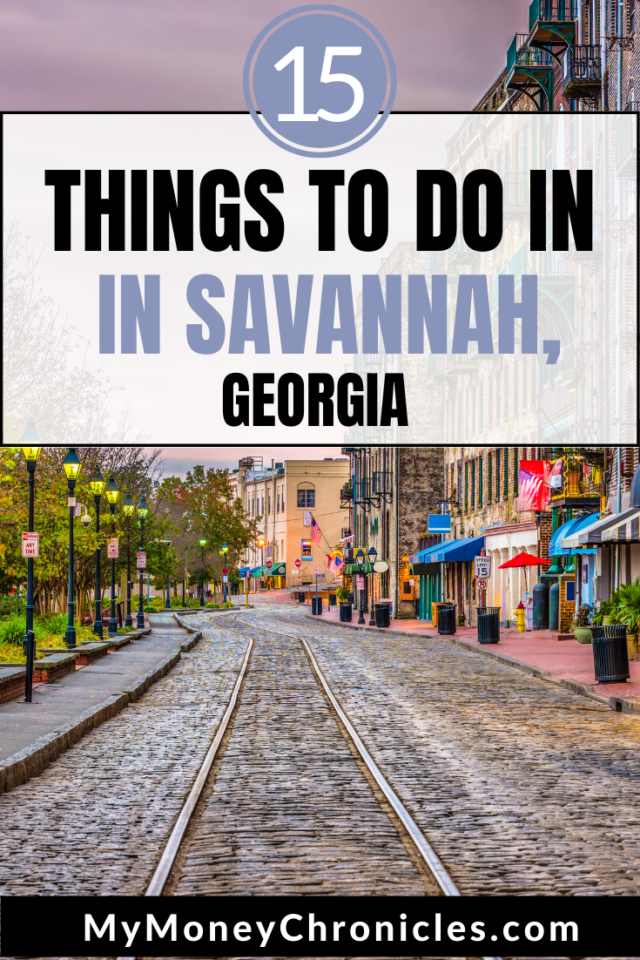 Savannah, Georgia, is one of my favorite cities. It’s a city that I have grown fond of having lived there for 8 years. Those were some of the best years of my life. Savannah is about four hours south of Atlanta, Georgia, and about two hours north of Jacksonville, Florida. Savannah has grown a lot over the last few years. There are many things to do in the city by the sea. Today, I want to go over 15 things to do in Savannah.

15 Things to do in Savannah

One of my favorite places to go when I’m in Savannah is River Street. River Street is located on the Savannah River. There are various shops, restaurants, and bars, including Wet Willies, Tubby’s Seafood, and Old Savannah Tours. On the first Friday of every month, they have a fireworks show. River Street is a good place to hang with your family and friends. You can get some good pictures of the Talmadge Bridge, which connects Savannah and Hutchinson Island.

City Market is not too far from River Street. There are art galleries, more restaurants, and bars to choose from at City Market. City Market even has live entertainment during the weekends. A couple of places to visit in City Market are Pour Larry’s, which is a cool place to grab a drink, and Vinnie Van Go-Go’s, which has some of the best pizza in the city.

My alma mater, Savannah State University, is located in Savannah. It is the oldest historically black university in the state of Georgia, as it was founded in 1890. SSU offers 30 undergraduate and six graduate programs. Not to be a homer, but if you know someone that wants to go to an HBCU in Georgia, have them check out Savannah State University.

Tybee Island is about 15 minutes from downtown Savannah.  The island has a nice beach area where people go and relax. They have a popular pier and pavilion that can get pretty crowded during summer. Tybee Island also has a few restaurants and hotels to cater to tourists. Spanky’s and The Crab Shack are popular places to eat.

If you like to shop, Savannah has a few options for you. There are two malls in the Savannah city limits. They are the Savannah Mall, located on the south side of town, and Oglethorpe Mall, which is in midtown. A Tanger Outlets is also located in Pooler, GA, right outside Savannah.

Grayson Stadium is a minor league baseball stadium. They formerly hosted the Savannah Sand Gnats, a minor league affiliate of the New York Mets. The Sand Gnats left Savannah after the 2015 season. The Savannah Bananas of the Coastal Plain League call Grayson Stadium home. The team is very popular, with the locals having broken the Coastal Plain League single-season record in 2016 and 2017.

SCAD’s oldest location is in Savannah, Georgia. It is one of the best art schools to attend in the country. They host the Savannah Film Festival, the longest-running university film festival in the country.

Savannah is a very nice city. These are just a few things to do in Savannah. It is a city that I used to visit yearly until life got in the way. I have to change that. Its southern charm is tough to match. Savannah’s weather is usually great for most of the year, so there isn’t a bad time to visit.

This historic park in Savannah is gorgeous.  A delightful, green, lavish scene, it’s popular among tourists and locals. You can enjoy 30 acres of trees, flowers, and other foliage. The site almost always has something going on, from the open-air concerts to a farmer’s market that is open every Saturday. Forsyth Park is also home to one of the most photographed spots in Savannah. The colossal, beautiful fountain is Instagram-worthy and should not be missed.

If you plan to explore the best-known locations around Savannah’s historic district, try the hop-on, hop-off trolley tour. This is one of the best ways to discover the city if you’re staying for a few days and want to visit as many sites as possible in just an afternoon. The trolley covers 22 squares and shows off Savannah’s most important landmarks, like the Temple Mickve Israel, the Cathedral of St. John the Baptist, the Juliette Gordon Low Home, Sorrel Weed House, the Mansion of Forsythe Park, the Mulberry Inn, and the Pirates House. There are 15 separate stops, and you can get off the trolley whenever you want to go sightseeing, and you don’t have to worry as another one will be right there to pick you up, nearly whenever you like, as they come around an interval of every 15 to 20 minutes.

If you’re an architecture enthusiast, you are already aware of this Savannah staple, but even if you’re not, if you can appreciate a good bit of luxury living and history, you should visit the Owens-Thomas House. It was built in 1819 as a stunning Regency-style mansion with adjacent gardens, a coach house, and slave quarters, which offers a chance for visitors to explore the intricate relationships between the most and least powerful residents in the city during the early 19th century. It has been regarded as a National Historic Landmark since 1976. The visiting hours are just a tad odd, so please check the timings before you head over.

The Telfair Museum is the oldest art museum in the South, it is located within a classical Regency mansion. An English architect designed it, and was purchased by the son of the Georgian governor. Its construction was completed in 1819, and remained with the same family until 1875. It was then handed over to the Georgia Historical Society by the last surviving member of the Telfair family, who left the mansion with all its furnishings. It was renovated just eight years later, the structure was enlarged, and a sculpture gallery and rotunda were added. Now, the visitors can see the carefully restored interior rooms, paintings from German Impressionists and the American French, antique furniture, silver, and other items.

Also, the museum has the largest public collection of paintings by Kahlil Gibran, around 80.

13. The Cathedral of St. John the Baptist

Known as the most spectacular building in all of Savannah, the Cathedral of St. John the Baptist certainly will make your jaw drop with its breathtaking towering spires and stained glass. Religious mass and guided or self-guided tours are available from 9 am to 11:45 a.m. and 12:45 pm to 5 p.m. from Monday to Saturday for just $2. A historic fire destroyed much of what was there in 1898; however, within two years, the cathedral was reconstructed, which is now seen to represent the tradition of faith within Savannah. It’s one of the Top 10 historical sites to visit in the United States and welcomes hundreds of thousands of tourists annually.

If you’re looking for that classic Southern photo with the mossy oak trees hanging over a beautiful lane, this is where you’ll find it. This beautiful avenue with all the oaks and Spanish moss leads to the ruins of Wormsloe, a colonial estate, the oldest standing structure in Savannah. While visiting this place during an event, you may notice some costumed reenactors, but on a normal day, you can visit the museum and trek through the nature trail and ruins and around the grounds. Guided tours start daily at 9:30 am, 11 am, 1:30 pm, and 3 pm.

A trip to Savannah will never be complete until you visit Leopold’s Ice Cream. It is one of the World’s Top 10 Ice Cream Parlors and is a ‘Must Visit. You will find something for everyone here, from handcrafted, old-fashioned soda fountain favorites to Hollywood movie memorabilia.

Since 1919, the little ice cream shop has remained the same since it was opened by Hollywood’s famous producer Stratton Leopold. There’s always a line, but it’ll be well worth it, and the ice cream made on-site is simply awesome. Both the ingredients and the recipes have been passed down through the generations. Their signature flavor, and most recommended by the mass, is the Tutti-Frutti.

What are some of your favorite things to do in Savannah, GA?

There are hundreds of hotels in Savannah. You can check Tripadvisor and review them here.

I am a fan of both services. I save more money using a ride-sharing service instead of renting a car. Below are two deals they are giving new users.

$5 off your first Uber ride

$5 off your first Lyft ride

Book your travel through Rakuten and receive cash back on purchases. Click the link to sign up today.