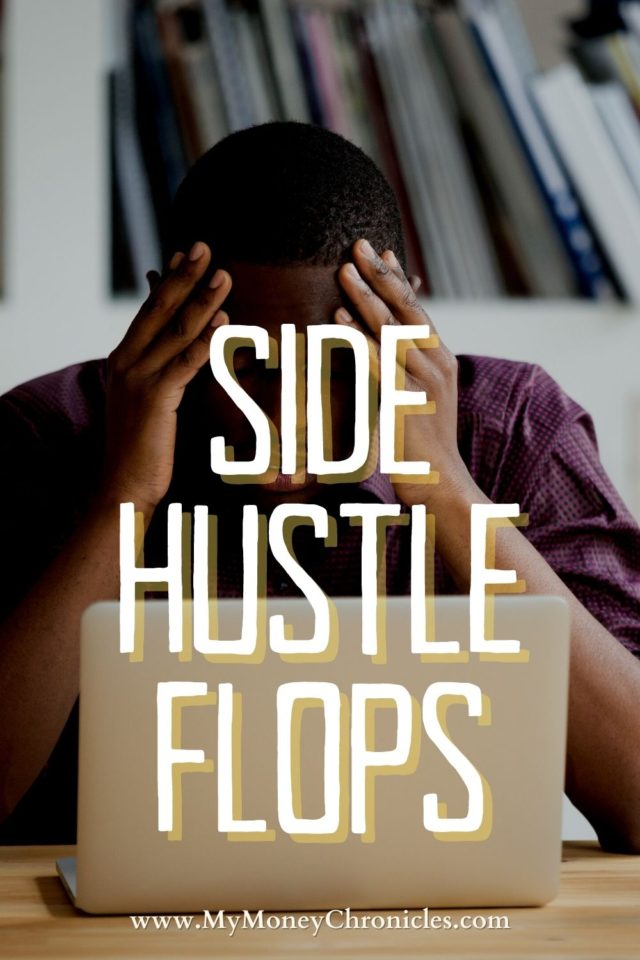 What’s going on everyone? I hope things are going well for you right now. If you’ve been reading my site for awhile, you know that I’m a fan of side hustles and looking for ways to make extra money. A lot of bloggers discuss only their successes. I like to tell you about my wins and losses. In previous posts, I’ve talked about selling stuff whether it’s been online or in person. Today, I want to share with you some of my side hustle flops.

I’ve been selling t-shirts on and off since 2009.  I’ve sold them on FB and on the streets of Savannah, GA during St. Patty’s Day weekend. I’ve done pretty well with my St. Patty’s Day design over the years. Not every design has been a hit, though. The “I love Decatur, ” and “GA Peach” shirts were great ideas in my opinion, but for some reason, they never took off. Before I made the shirts people said they liked the designs. The funny thing is when I printed the shirts and started selling them all I heard was crickets. I took losses on both of the designs. I still like the ideas of the shirts, but I’ve come to the point where I know that they probably won’t sell. I eventually donated them to one of my local thrift stores a couple of years ago.

I’ve created a lot of designs since then. I’ve had some hits and misses.

A few years ago I attempted to try some Fiverr gigs. I planned to write some blog posts about certain topics and also create itineraries for the city of Atlanta. I only sold one of those gigs. Instead of promoting them or coming up with more, I gave up. Fiverr only pays you $5  (less than that after fees) in the beginning. I realized pretty quickly that this wasn’t the side hustle for me. I’d rather do something where I can make more money.

I had an affiliate site for a year. I won’t disclose all of the details, but I will just say it was in the beauty market (don’t ask). The site failed to generate any money except for a couple of Google AdSense dollars. I’m not mad because I only spent $12 on the website. I went wrong because I didn’t research enough about the product that I was selling. I thought I could ask a few people some questions and put up links based on their answers. It doesn’t work like that.

The next affiliate site that I will create will probably happen next year. I’m going to choose products that I know more about. I’m also going to outsource most of the articles as well. I’ve learned so much about affiliate marketing since I started that site. You can make some decent, nearly passive income if you know what you’re doing.

In my Things I’ve Sold for Money post, I told y’all that I used to sell noni juice. I tried this side hustle out for a few months. I can’t remember, but I probably only sold eight bottles of the juice. The noni juice company was a damn pyramid scheme. Unless you know people who will buy the juice religiously you won’t make any real money. My only check from that company was for $18 bucks. What could I do with that? Nothing really, so I stopped wasting my time with noni juice.

This was another one of my side hustle flops. I actually made some good money doing this for a while. It was fun when it first started, but it started to feel like a job. I would dread having to write for 4-5 hours each Saturday and Sunday morning. I began to hate freelance writing. I think the universe heard me because I lost all my clients within a six-week time frame. The crazy thing is that I wasn’t mad. I knew that this side hustle was not for me.

After I lost my clients, I decided not to look for more of them. I took some time to think about other ways that I could money. I started to put more focus on eBay and the rest is history.

I don’t even talk about this side hustle that often. I’m a huge sports fan, so I figured that I’d try my hand at refereeing. I figured that because I knew the rules of the game that it would be easy as hell. Man, was I wrong. Refereeing is a lot harder than it looks. You have to pay attention to every play and make the calls correctly. I was out there struggling a bit lol. Also, a couple of the players didn’t some of the calls. I’m not really a fan of people talking crazy because I curse back. God is still working with me for that one. After the first week, I knew that this side hustle was not for me. I have much respect for every referee out there. It is no joke. You have to be a certain type of person to do that job.

A couple of times people have asked me to help them with club promotions. It’s hard to promote something that you don’t believe in or that’s not really popping. Instead of doing real promotions, I ended up just posting flyers on cars. That alone should tell you how long ago that was. I could have stopped strangers and tried to talk to them and get them interested in what I was promoting, but I wasn’t motivated to do that.

That’s when I knew I wasn’t promoter material. Sometimes you have to try something to see if you will like it or not. I realized that club promoting was not for me (unless it was a Sigma party).

Have you ever had any side hustle flops? How did you react to them? Feel free to comment with your answer below.