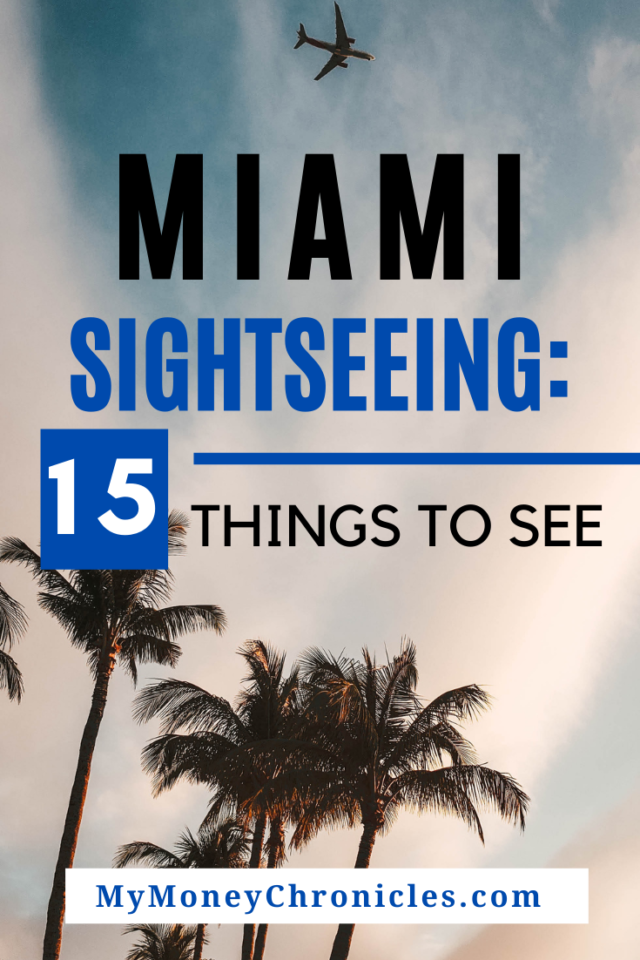 A few years ago, I had the opportunity to bring the year in one of my favorite cities, which is Miami, Florida. You can’t beat 80-degree weather in the winter. Even though I’ve been there a few times, I can never get enough of the city. It seems like Miami gets better and better with each visit. Miami sightseeing is amazing. This post features 15 things for you to see and do.

The Bayside Marketplace is located in downtown Miami. They have a lot of nice stores and restaurants to visit such as Hard Rock Cafe and Hooters. It’s a cool place to walk around a people watch. You can even catch live music out there from time to time.

South Beach is a neighborhood in Miami Beach. There is always something going on. The beach is usually full of people during any time of the year. There are also numerous bars and restaurants in the area. You literally have blocks of places to choose from Many people grab something to eat or drink then head right back to the beach. Some of my favorite places to go on South Beach are Wet Willies and Fat Tuesday. This is one of my favorite places for Miami sightseeing.

Miami Hotel Deals! SAVE when you check rates with TripAdvisor.

Collins Avenue is the main street in Miami Beach It runs parallel to the Atlantic Ocean. You can get from South Beach to North Beach via Collins Avenue. The Bal Harbour shops are also located on Collins Ave. There are also multiple places for you to stop and get souvenirs from too.

The Lincoln Road shops is an open-air mall. There are several restaurants, luxury shopping, and galleries in the area.  Lincoln Road sits between 16th and 17th streets and Washington Ave and Alton Road.

One of the most popular attractions in the city of Miami, Jungle Island, is located on Watson Island and was previously known as Parrot Jungle. Even Winston Churchill visited this place in 1946.
Only minutes away from South Beach and Downtown Miami, it manages to entertain visitors with a sense of adventure and discovery through interactive experiences. Don’t miss out on the exciting shows which are a daily occurrence.

Beautifully restored buildings with a hint of 1930s touch, Art Deco district, offers so much to spend a relaxing day in the Miami Beach area. A lovely view, the pastel-painted buildings are a great place to stop for lunch or supper.
The Art Deco District really comes in its own after sunset, filled with neon signs and canopy-covered dining areas. It’s one of the best places for Miami sightseeing.

The Vizcaya Museum and Gardens

Regarded as one of Miami’s greatest attractions, The Vizcaya Museum and Gardens with its elegant architecture, grounds, and artwork are worthy of a visit. With 34 rooms arranged around a stunning courtyard, the Renaissance-style villa is filled with the most magnificent European furniture and arts from the 15th to the 19th century. To complete this 28-acre estate, more than 1,100 craftsmen were bought over from Europe to achieve true authenticity in design.

With over 2000 wild animals, Miami Zoo gives visitors a sense of exploring a real safari. It provides animals with the most natural habitat. Experience open-air exhibits and a cage-free environment and an opportunity to enjoy endangered wildlife up close. The Miami Zoo, with lots of animal interactions, isn’t the biggest, but it’s perfect for families, especially for young kids with a children’s zoo having a variety of attractions such as camel rides.

This is another great place for some Miami sightseeing. Known for its cultural flavor, Little Havana offers plenty of entertainment from outdoor socializing spaces to its many restaurants and specialty food stalls.
The atmosphere is filled with non-stop lively Latin music and street art depicting famous Cuban figures. You will find yourself lost in a distinctive cultural setting. The heart of Little Havana, Calle Ocho, is the busiest part of the neighborhood. However, the district has slowly spread towards nearby streets and avenues.

Here you can enjoy many interactive exhibits and numerous hands-on displays, Miami’s Science museum offers a truly immersive experience surrounding physics, biology, and chemistry. Started in 1949, it has grown significantly and has expanded its space significantly over the years. It’s estimated to have around 700,000 visitors every year.
The museum regularly changes exhibits offering fresh themes and displays which is great even for a 2nd or 4th visit.

Just outside of Miami, The Everglades National Park is home to snakes, alligators, crocodiles, and a whole host of birds, covering 1.5 million acres of swampland. One of the thrilling ways to experience wildlife is to ride a high-speed airboat. You can even walk the trails and boardwalks to explore the Everglades. With the airboat tour, you are guaranteed to be entertained as they take you deep into the marshes and streams, the best way to see alligators.

In 1925, the Freedom Tower was built with an important purpose to serve as an immigration-processing center for thousands of Cuban refugees that came to settle in the city. As of today, it stands as a tribute to Cuban immigration and is among the oldest and most prominent skyscrapers in the South Eastern United States. For many years, it has also served as the head office of the Miami Daily News. Nowadays, it is used as a museum, cultural center, and an education center.

With its mission to rehabilitate and rescue Florida’s endangered manatees, the Miami Sea Aquarium has always been admired and has attracted visitors from all around the world.
The aquarium will delight any visitor with its daily shows showing dolphins, killer whales and other ocean mammals.
If you want more, then check out the large observation tanks containing a variety of tropical fish, sharks and even alligators. Be sure to sign up for the “swim with dolphins” program that educates about the behavior and natural history of dolphins.

A sandy beach with the sun shining, probably this is what comes to your mind when you think of Miami.
Regarded as a legend in the city, Miami Beach is undoubtedly the best place in Miami to soak up some sunshine and perhaps get that tanned look. Technically, the beach itself is outside of the Miami municipality area because it is located on an island. Apart from the beaches, it is also known for its Art Deco district and the odd but beautiful pastel-painted buildings in the area.

Have you ever been to Miami? What are your favorite Miami sightseeing locations?

I’ve been able to use airline points for many of my flights this year. I applied for the Southwest Rapid Rewards Credit Card earlier this year. I was able to get 50,000 airline points by spending a certain amount within 90 days. To be honest, I haven’t even used half of those points yet. If you fly with Southwest and want to get the awards card, visit this link for more details.

Get $5 off your first Lyft ride when you click this exclusive link.

If I can’t find a hotel deal when I’m traveling, I use Airbnb. I’ve used it in places like Havana, Cuba and Miami, Florida. Both places that I stayed in were nice. Use this coupon the first time you book a stay with Airbnb, and you can save $40.